Arthur - Best that you can do? 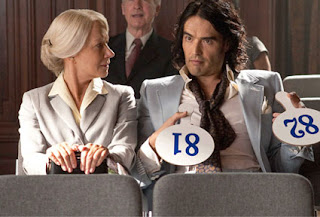 A few years ago, director John Waters commented on the Hollywood trend of remakes by telling filmmakers they should stop remaking classics and remake bad movies and make them better.  Hollywood, sadly, has not heeded his words and now gives us a "re-boot" of the comedy classic Arthur.  Any movie from the 1980s is ripe for the picking because the people who go to the movies, especially on opening weekend, weren't even born when the original Arthur was released in 1981, and they almost surely don't know Dudley Moore and only know Liza Minnelli as that old singer from Sex & the City 2 (and maybe Arrested Development).

The original Arthur Bach was a drunk, plain and simple.  A fun drunk, but a drunk nonetheless.  He was also filthy rich thanks to his family's deep pockets and he loved to cruise around a pre-Disney-fied New York City picking up prostitutes for a night of fun.  He had a servant named Hobson (played brilliantly by Sir John Gielgud, who won the Best Supporting Actor Oscar for the role).  Arthur's family are dismayed by his behavior and threaten to cut him off unless he marries a girl named Susan - more of a business arrangement than a real marriage.  Unfortunately, Arthur has fallen for another girl from the wrong side of the tracks (Liza Minnelli), but is forced to go through with the wedding because money talks.  Hobson takes ill and passes away, leaving Arthur (who had been sober while caring for Hobson) despondent.  He hits the bottle again, tells Linda he loves her and they go to the church to stop the wedding.  Susan's father, however, is very over-protective and gives Arthur a thrashing at the church when he shows up with Linda and the wedding is cancelled.  Arthur knows he will be broke but happy, but his grandmother tells him that he can have the money because no Bach will ever be a working class person.

The new Arthur follows the same basic plot, but without any of the charm.  This Arthur, played by Russell Brand, is a child in an adult's body whereas the original Arthur was just an irresponsible adult.  We're told the new Arthur drinks but he spends more time playing with his toys and causing havoc around New York than he does getting drunk.  Political correctness has caught up with Arthur so much that now he attends AA meetings!  There is also some gender-bending as his mother, rather than his father and grandmother, threatens to cut him off from the family fortune if he doesn't marry Susan (Jennifer Garner) but his heart is once again torn by a girl from the wrong side of the tracks, this time named Naomi (Greta Gerwig).  Hobson is now a woman (Helen Mirren) who is Arthur's nanny instead of butler.  Yes, nanny.  Unfortunately for Mirren, she doesn't have half as many great one-liners as Gielgud did in the original (don't count on any Oscar glory for this one), and her illness and death happen so fast that there is no real emotional impact.

I will be honest and admit that I am not the world's biggest Russell Brand fan.  His voice is grating and he's really not pleasant to look at.  All I could think about was if he ever washes his hair.  He plays the little boy in Arthur perfectly but there's never any real growth in the character, even when he does call off the wedding and forsakes his millions.  Jennifer Garner did turn in a nice performance as the woman who knew her marriage to Arthur was only business, because by taking the Bach name she would control his company when his mother stepped down.  Garner played the cold-hearted gold digger very well.  It's hard to tell if Mirren just took the role for the paycheck or if she was just acting exasperated by Brand through the entire shoot, because she was just a sourpuss the whole time.  Audiences loved Gielgud's Hobson because he was witty and just rolled his eyes at Arthur, while Mirren's Hobson just comes off as a disapproving parent.  Worst of all is Greta Gerwig.  I enjoyed her performance in No Strings Attached, but here she's got one expression and one tone of voice, no matter how happy or angry she is with Arthur.

It's been a long time since I've seen the original Arthur, but I do remember laughing a lot while watching it.  I laughed once during the new Arthur.  Some movies are just of their time and can't be remade or updated without taking some drastic measures.  Arthur was certainly of a time when audiences could laugh with and love a drunk millionaire with a penchant for ladies of the evening (and a heart of gold).  It's hard to warm up to a spoiled brat millionaire with a fleet of movie cars (including the original Arthur limo) who doesn't know the value of a dollar even if he does have a heart of gold.  The best that you can do?  Rent the original.