Tooting my own horn 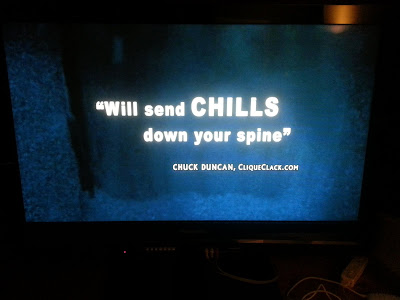 I have to crow a little about this awesome thing that happened Monday night.  I wrote a review for the WWE Studios film Barricade (below), and they actually pulled a quote from the review and used it in a televised promo for the DVD (above)! The promo aired on the USA Network Monday, October 15 during WWE Monday Night Raw. This is almost as good as winning an Oscar!

Erik McCormack gets cabin fever in Barricade
After playing Will Truman on Will & Grace for nine seasons, Eric McCormack has stepped as far away from the sitcom genre as he could over the last few years, most recently headlining the new TV drama Perception. Now, McCormack has gone even further out of his comfort zone with his starring role in the new psychological horror film Barricade, produced by WWE Studios and now available on DVD and Blu-ray.

Barricade tells the story of Terence Shade, a psychologist who doesn't have enough time in the day to spend with his kids. His wife wants them all to go to her old family cabin way, way, way up in the mountains to give the kids a white Christmas. The story jumps to a year later, and Shade's wife has died under mysterious circumstances (mysterious, at least, until the climax of the movie), but he wants to honor her wishes and takes their two kids to the cabin. Once there, strange noises and shadows begin to terrorize the family … or has madness overtaken them?

You have to hand it to the producers of Barricade for really committing to the psychological horror of the story and not going for the over-the-top blood and guts you might expect … especially coming from WWE Studios. Yes, that WWE. In fact, this is the first WWE production that does not feature any of its stable of wrestling stars. Besides the wife and the old man, who are only in the film briefly, this really is a story about three characters confined to a single location. You almost get a The Shining vibe as the story progresses, although you don't know if Terence has actually gone mad, if the cabin is haunted (since we don't know how the wife died), or if something else is affecting his behavior. The story keeps the viewer nicely off-balance, never knowing if what Terence is seeing and experiencing is real or imagined.

That's not to say that some of the scare aren't cheap ones. Early on, the filmmakers rely way to much on the LOUD MUSIC CUE to make you jump, when it's not really necessary. At one point, Terence looks out the window and the grotesque face of his dead wife is peering in at them. A quick cut to that would have been sufficiently creepy, so it really didn't need that extra OOMPH of the music to make you jump. It actually distracted me from seeing the face in the window because I did jump. So, yeah, it works but for all the wrong reasons.

While the film works hard to keep you guessing, McCormack gets kudos for his off-balance performance as well. He has to walk that fine edge of sanity and madness without ever teetering off to either side. We know as the story progresses that Terence is severely over-medicating himself (presumably to deal with his wife's death), so that may have something to do with his behavior. He, and perhaps the kids, come down with the flu as well, so that may also have something to do with the delirium. But you're never sure if anything Terence is doing is actually happening or all in his head because things can change in an instant within a scene, and McCormack has to go from madness to rational adult in the blink of an eye and he always pulls it off.

Barricade may not be a great thriller, but it's good enough to warrant a look for McCormack's performance and the terrific production design (be sure to check out the informative extras on the DVD to see how they built the cabin interiors and created the snowy exteriors). The ending may be a bit too tidy – it's certainly not an M. Night Shyamalan twist – but at least we know what happened to the wife, and if Terence is sane, mad or just a little under the weather. If you're looking for something that will send chills down your spine without a lot of blood, gore, masked killers or scary monsters, then this just might be the movie for you.
Posted by CRDBlog No comments: 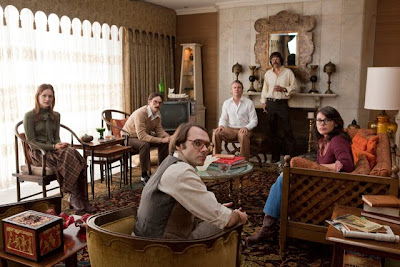 We always talk about how Madonna has reinvented herself over the years, but her popularity has never really been in question. Ben Affleck, on the other hand, has become the master of reinvention after his Hollywood golden boy status was tarnished by more than a few stinkers: Gigli, Daredevil, Surviving Christmas, to name a few. But after winning an Oscar for his screenplay for Good Will Hunting (with pal Matt Damon), Affleck has now turned his attention to directing. His major screen debut, Gone Baby Gone, was a gripping tale of a child's kidnapping that nabbed Oscar, Golden Globe and SAG Award nominations for Amy Adams. His follow-up was the critically acclaimed The Town, in which he also acted and which scored an Oscar nomination for Jeremy Renner.

Now Affleck is back in the director's chair – successfully – and on screen in the new real life thriller Argo. Argo tells the formerly classified story of six Americans who escaped the US embassy in Iran during the hostage crisis in 1979. The Americans managed to slip out of the embassy and after trying to find sanctuary at several different embassies, the Canadian ambassador and his wife took them in at great risk to their own lives. The US government went through several scenarios to try to get them out, but hostage extraction expert Tony Mendez said none of the ideas would work because none of them made sense (for example, providing them with fake teacher visas when there were no US teachers in the country). Mendez, who had worked with some Hollywood connections including makeup artist John Chambers (the original Planet of the Apes) and other Hollywood contacts, came up with the idea to make the six Americans members of a film crew scouting locations for a sci-fi flick called "Argo." The government wasn't thrilled with the idea, but it was the "best bad idea" they had. And it worked!

That's not to say the plan was foolproof or without peril, but even though we know the outcome – they were returned home safely – Affleck manages to ramp up the tension as they attempt to get through the military security at the airport as a sweatshop of workers try to piece together shredded images of the six missing Americans. You really are on the edge of your seat and holding your breath until that plane clears Iranian air space. Affleck not only nails the story and the tension, but the period as well. The fashion, the hair, the porn 'staches, the décor, everything is done to perfection. And the proof is in the pudding as the end credits juxtaposes actual photos of the people and key events with the recreations in the film.

Aside from a few familiar faces like Affleck, Bryan Cranston, John Goodman, Victor Garber, Kyle Chandler, and Alan Arkin, the six Americans are played by mostly unfamiliar actors (or those with faces you know but can't place the name … and they're almost unrecognizable anyway under the period hair styles) which gives the film an even stronger sense of realism. Casting BIG names in those roles would have been too distracting, so the right decision was made to go with less well-known faces.

As a historical drama – and there is a brief but crucial introduction of Iranian history to put the whole conflict in perspective – Argo is a movie that could probably be shown in classrooms. Some of the incidentals have been changed for dramatic purposes, but it still tells a compelling story from an important moment in American and world history. That's not to say it's just as dry as the desert sands either. Argo is suspenseful and gripping, with just the right amount of humor (mostly provided by Goodman and Arkin as they try to get their fake movie financed without revealing that the entire operation is a farce) to make this a crackling piece of entertainment. I don't think I'm going too far off base here by saying that the film is almost sure to get a Best Picture nomination at next year's Oscars, and if Affleck doesn't get a director nomination as well, there is no justice in Hollywood. As it is in the here and now, Argo should be on your must-see list.
Posted by CRDBlog No comments: