The Hobbit finds its way to Blu-ray 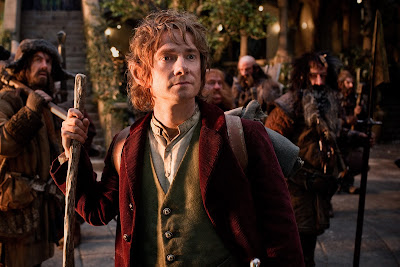 Warner Brothers is releasing Peter Jackson's The Hobbit: An Unexpected Journey on multiple home video formats on March 19 but the big question is will fans of the original Lord of the Rings trilogy be an enamored with this film (and its two coming follow-ups)? Before I go through the Blu-ray, here's a look back at my original review posted on CliqueClack.com:


Wow, has it really been nine years since The Lord of the Rings: The Return of the King was released? It really doesn't seem that long, but it does seem like it's been an eternity since the wheels started turning on production of The Hobbit, what with the rights feuds, a studio bankruptcy, and a director withdrawing even before the first frame was shot. But now it's here, at least the first of three chapters, and the big question now is: was it worth the wait?

The answer is neither yes or no, as the first chapter in the new trilogy is resoundingly average. I remember being enraptured by the first Lord of the Rings movie from the very beginning; the look, the style, the music … everything about it just drew you into the world of Middle Earth. Since we've all been there, settling into a viewing of The Hobbit: An Unexpected Journey, should be like settling into a comfy couch. You certainly know what to expect style-wise with Peter Jackson once again behind the camera, and even the story should have some familiarity to it since we're re-connecting with characters we already know from the previous films (even though this one takes place sixty years earlier).

Unfortunately, what Jackson has done by taking a simple, single volume children's story and turning it into a nine-hour epic is made the movie overly bloated and episodic, especially during the first hour when we're meeting the thirteen dwarfs and getting side stories that do and do not have any bearing on the main story at hand. For instance, Gandalf (Ian McKellan) tells the story of another wizard, Radagast the Brown (Sylvester McCoy) and his discovery of a necromancer destroying nature all around him. This side story intrudes on the main story as Gandalf brings news of the necromancer to Elrond (Hugo Weaving), Galadriel (Cate Blanchett), and Saruman (Christopher Lee) who dismisses it as just a man playing with magic. Of course, the necromancer will obviously play into the story as Benedict Cumberbatch was cast in the role (and he's credited, but never seen in the movie ... and will be providing the voice of Smaug the dragon).

The main plot of the book is there, though, between all of the extra stuff Jackson has added. Bilbo Baggins (a terrific Martin Freeman) is enlisted by Gandalf to join a band of dwarfs on their quest to regain their homeland, and gold, from Smaug. Along the way, they have to battle orcs, goblins, trolls, and after getting separated from the group during an underground battle with the goblins, Bilbo meets up with a strange creature, Gollum (Andy Serkis), and comes in possession of that magical, golden ring. It's here that the movie finally kicks into gear with Serkis' amazing performance. The Academy of Motion Picture Arts and Sciences really needs to rethink their acting categories to include motion capture performances like this, because even though the actor is replaced by a fully realized CG character, his performance is just stunning (and the advances in CG rendering since the last movie has grown by leaps and bounds, making this the most realistic Gollum yet).

Unfortunately, the movie ends just as it's really getting started with the band of travelers seeing their destination for the first time off in the distance. What The Hobbit: An Unexpected Journey ends up being is a three-hour origin story that we have to wait a year to see how it pans out. Another problem I had was that the whole thing felt like Jackson was just indulging himself. It took a while for the LOTR films to show us some major battles, but The Hobbit has at least three! The effects are incredible, but it all seemed like a bit of overkill and padding. The story has gotten completely lost amongst all the pageantry. More time should have been spent getting to know the dwarfs, the camaraderie, the journey, instead of just throwing one battle after another at us (and don't get me started on the pointless rock giants fight scene that only served to show off more CGI wonders). As it is, by the end of the movie, you really don't care one way or another about Thorin's (Richard Armitage) quest to get back to his home, and with most of the plot points from the book already included in this movie, you have to wonder how much more padding is to come. I fear that the Hobbit trilogy is going to go down in film history as the new Star Wars prequels trilogy.

When I saw the film theatrically, I saw the new HFR 48 fps 3D version which did not impress me at all. It ended up looking like an old BBC video production that you might have seen on Masterpiece Theater. The sharpness and detail were amazing, but it just didn't look like a movie or have that film-like quality the other trilogy has. It looked surprisingly flat even though it was in 3D, and some of the scenes were overly bright and contrasty with some of the white areas almost blown out. I was hoping that the presentation of the film on Blu-ray would correct some of these issues, but it only seems to magnify the problems. Not that there's anything wrong with the Blu-ray presentation itself, it's the source elements that are to blame. Some of the flat, overly lit scenes are still flat and overly lit. There are also some issues involved with converting the 48 fps down to 24p for Blu-ray, especially in any scene that has a lot of fast motion -- some of the CGI effects move just a bit too fast and there is no motion blur, so they just look like really bad special effects. I wondered if the HFR process was going to impact the eventual home video edition, and it has. The average viewer may not notice but, to me, it stuck out like a sore thumb. The film's audio, however, will give your home theater system a nice workout.

The Blu-ray + DVD combo contains the complete movie on a single disk with no extras, giving the film room to breathe (the DVD is the same). A separate disk contains the bonus material, and while you can't technically call this a "bare bones edition," the bonus material is really nothing new. The bulk of the material is the ten-part video blogs Jackson and his crew produced during the production of the film, and since these were available online before the movie was released, the blogs are mostly a tease for what is to come.  The ten blogs, if you haven't already seen them online are:

Also included is a six-minute promotional video apparently produced to promote New Zealand tourism, using the films as its selling point, several Hobbit theatrical trailers and video game trailers. There is also a code included for the Ultraviolet version of the movie which you can stream on a variety of mobile devices whenever and wherever you want. Of course, there will be a deluxe expanded edition coming later this year which will have a lot more bonus material and even more padding added to the movie itself (that it will help bring more depth to the film as the re-inserted material did for the LOTR trilogy is debatable). So, hardcore fans may want to hold out for that edition of the video ... except there is one extra special bonus that those fans will probably want to see: with the code provided in each copy of the home video, owners will be able to access a live video presentation of a first look at The Hobbit: The Desolation of Smaug hosted by Peter Jackson on Sunday, March 24 at 3:00 PM Eastern/Noon Pacific (an edited version will be archived on the film's website). You just have to decide if the purchase price is worth having access to the live event.

The Hobbit: An Unexpected Journey is currently available for Digital Download, and will be available as a Blu-ray combo pack, Blu-ray 3D combo pack, and 2-Disc DVD Special Edition on March 19.