Finding love with
The Men Next Door 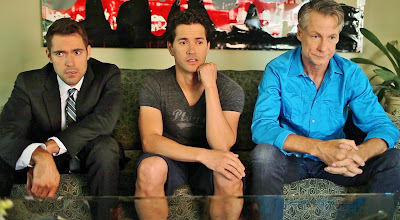 Getting the Hollywood studio machine to tackle an honest gay love story is a rarity, so it comes down to the indie filmmakers of the world to create films for smaller, target audiences. One of the most prolific indie producers in the marketplace today is Guest House Films, which has produced and distributed a variety of LGBT films with titles like Make the Yuletide Gay, Blue Briefs, Black Briefs, and Role/Play. The quality of these films, and others not from Guest House, vary wildly in quality (writing, acting, production). For the most part, I've been really disappointed with films targeted at LGBT viewers because I've found most of them to be cynical in their depiction of gay men. The message always seems to be that gay men don't want or can't be in a committed, long-term relationship, and as we continue to fight for equal rights for LGBT people, especially on the marriage front, I just find this message disheartening.

Director Rob Williams' Role/Play left a bad taste in my mouth with its depiction of relationships between several gay men, so I was a little hesitant to commit to his latest film, The Men Next Door. The story focuses on Doug (Eric Dean), a 40-year-old man with a group of the worst friends in the world. None of them show up for his milestone birthday party (at this point I was already prepared for the worst from the film), but at least his brother sends him a stripper. Unfortunately, it's a woman (bro thought he would send something Doug didn't already have). Doug manages to get the woman out of his house just as a man arrives whom Doug also thinks is a birthday gift from his brother. Turns out, he's the new neighbor who doesn't mind being mistaken for a stripper and allows himself to be unwrapped. Doug feels a connection with 30-year-old Colton (Benjamin Lutz), but he's also seeing another man, the 50-year-old Jacob (Michael Nicklin). What Doug soon discovers is that Jacob and Colton are … father and son! They try to keep each relationship on the down low, but they all come crashing together at one point and Doug tries to balance both as he makes a decision on who to stay with. The question is, can Colton and Jacob manage to maintain their own relationship while Doug weighs his options?

I hate to give anything away, so I will try to be as spoiler-free as possible, but I have to say that I was ultimately charmed by The Men Next Door because of its more adult and realistic (well, as realistic as you can be with this situation) attitude towards gay men and relationships. For once, everyone involved in this triangle wants to be in a committed relationship. That's real progress for one of these movies! Williams' writing is honest and funny when it needs to be, even when some of the supporting characters fall into classic gay stereotypes. Doug's one female friend, Evelyn (Heidi Rhodes), is a bit over-the-top though, coming off as either insane, drunk, or both anytime she's in a scene. Lutz sometimes comes off as a bit wooden, but he's easy on the eyes. Nicklin and Dean, however, give very good performances and Dean is just so endearing that you really can't help but fall in love with him (and I have no idea if any of these actors are gay in real life, but they all seem very comfortable with each other … and there are quite a few scenes of nudity).

To me, The Men Next Door is Williams' most accomplished film to date from a production standpoint, to the caliber of acting and maturity of the writing. And I'm so happy to finally see a movie about gay male relationships that has a happy ending. In the crowded field of LGBT movies that cast a cynical eye on love, you can actually cuddle up with that someone special in your life on Valentine's Day with The Men Next Door and come away feeling good about your own relationship.

The Men Next Door is available on DVD from Amazon.com and other online retailers. Amazon also offers a digital version for purchase or rent. The DVD is also available to rent from Netflix.
Posted by CRDBlog