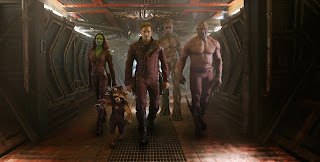 There's been a lot of talk about what the movie of the summer will be. A few weeks ago, everyone seemed to be in agreement, for the most part, that that movie was Dawn of the Planet of the Apes. But it looks like Marvel Studios has hit another home run ... make that a Grand Slam with their latest offering, Guardians of the Galaxy.


The studio has certainly been cranking the hype machine for several months now trying to get audiences who only know Iron Man, Thor, Captain America and the rest of the Avengers familiar with this new group of characters from a comic that has many fervent fans, but that fan base is considerably smaller compared to those who are at least familiar with the characters who have already hit the big screen from the Marvel Universe.

Guardians of the Galaxy tells the story of Peter Quill (Chris Pratt), a human who had been abducted from earth as a child moments after his mother dies. The story moves from that moment to Peter as an adult, apparently some kind of treasure hunter working with a blue alien, Yondu (Michael Rooker), to retrieve an orb for a client. Quill gets the orb, but also finds himself captured and incarcerated after a fight for the orb with Gamora (Zoe Saldana) that draws the attention of Rocket (Bradley Cooper), a genetically engineered creature that looks like a racoon, and Groot (Vin Diesel), an ambulatory tree whose vocabulary consists of "I am Groot" (only Rocket seems to understand what he's really saying).

Needless to say, things escalate as the four escape prison (with another prisoner, Drax the Destroyer, played by Dave Bautista) and they learn what the orb contains -- an Infinity Stone -- and who wants it to potentially destroy the galaxy -- that would be Ronan (Lee Pace) who is supposed to deliver the orb to galactic villain Thanos (Josh Brolin).

Guardians of the Galaxy, as directed by James Gunn, is a visual feast. It is the most comic booky comic book movie that's come along in quite some time. It really is one of the most wildly colorful movies out there with a color wheel of aliens of all hues: blues, green, pink, just about any color in the crayon box. The film, for the most part, is also very bright with most of the major scenes taking place in full daylight. It's far from a depressing movie.

But all that light and color doesn't mean the movie is light and fluffy. Yes, the movie is very, very funny with a script full of one-liners fans will be sure to be quoting for the rest of the summer (one of my favories involves the words "pelvic sorcery"). But with all of the comedy and action, the film has a great big heart too. You'll laugh a lot and you'll cry (or get a little weepy) a couple of times too. It's this great balance of action, laughs and heart that makes the movie work so well.

The cast, of course, also gets as much credit as Gunn and his scriptwriters. Pratt, whom most people know as paunchy, lovable oaf Andy on Parks & Recreation, cuts a fine form as the film's hero. Most people know he can pull off the comedy, but he puts all of his heart into the role too and makes Quill a fully rounded character, even when he's being an "a-hole." Saldana kicks ass with the best of them, and Bautista is surprisingly good delivering his very funny dialog with dead-on earnestness.

But whodathunk the film's real breakout stars would be a talking racoon and a talking tree? The CGI artists have done some amazing work bringing them to life, but Cooper and Diesel have done outstanding work lending their voices to a couple of characters that could have ended up as the butt of the joke and brought the movie way, way down. But they both elevate their characters to the same level as their human counterparts, becoming just as integral to the story and just as heroic as Quill by the end.

There really isn't much more to say about Guardians of the Galaxy. It's definitely a movie that needs to be seen to be appreciated, and it needs to be seen on the biggest screen possible. After seeing the 17 minute IMAX preview, it was a bit of a letdown to see it on a regular screen but credit must be given to Gunn for really planning and composing each shot for 3D. This is a conversion, but it's one of the finest conversions I've seen. Thank you, James Gunn, for really using the format to its best advantage. If you've had any reservations about seeing Guardians of the Galaxy, put them aside now and make plans to see what is undoubtedly the most entertaining movie of the summer.