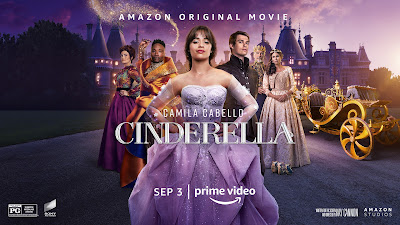 ‘Cinderella’ has an odd balance to it, with uniformly bad humor but fairly well done musical scenes.
by Jeremy Fogelman

Is the world finally sick of James Corden? I know many of his antics are incredibly annoying, but I always had a soft spot for his “Celebrity Noses” recurring sketch. Although in those he’s always being constantly frustrated, as opposed to throwing out a bunch of hacky awkward “jokes” in many of his appearances. But I think he can be entertaining when he’s not doing his shtick, for example, his short part in Ocean’s Eight. And apparently he had some idea for a new take on Cinderella.

Cinderella comes from director and writer Kay Cannon, who is known for all three Pitch Perfect movies, a bunch of 30 Rock episodes, and the cancelled show aptly named Girlboss. This version of the Cinderella tale is a bit close to the Disney version, although it never quite gets close enough to be a direct ripoff. The baseline story (or at least the well-known French version that inspired the modern versions) is the main inspiration, with animals turning into other things.

Here we follow Cinderella, played by Camila Cabello, similar to the classic version except that this version of Ella has dreams of being a dressmaker and running her own business. The movie incorporates both arrangements of song covers in very clunky and obvious ways and a few originals, like Cinderella’s “Million to One”. Weirdly, that song sounded very auto-tuned to me, and I know Camila Cabello can sing so it’s a bit odd.

But there’s a constant, very heavy-handed “girls rule, boys drool” sort of performative wokeness here, and a real resistance to any actual sort of antagonist with depth or legitimate threat. Cindy’s evil stepmother is played here by Idina Menzel, and her perspective could be easily explained by the overly obvious needle drop cover of “Material Girl”. She’s really let off the hook at the end of the movie for essentially trying to force Ella into an unwanted marriage.

Sometimes the unsubtle part is fine, like when Billy Porter shows up to sing some great songs and call himself the “Fabulous Godmother” -- but then he’s also called “Fab G” and it’s immediately cringey. Essentially every attempt at humor here is like that, not funny at all, and very try-hard. Still, the performances are pretty good, for the most part.

The Prince here is played by milquetoasty Nicholas Galitzine, who gets a lot better when the script gives him more emotional scenes and not so great when they try to make him jokey. His parents are played by Minnie Driver and Pierce Brosnan and it’s a real dissonant mess with how this world is constructed with a “monarchy”.

Most of the song arrangements are pretty good, and some are great, some of the performances are very good, and some, like unfortunately every terrible moment with James Corden or the very 90s parody rap moments, drag the movie to a halt every time. The real issue here is that the movie has pretenses of being a feminist subversion of the Cinderella tale, but it can’t help but try and appeal to all of the sorts of things that make you think of the “hello fellow kids” meme.

I feel like the song choices, if mostly executed well enough, were often so obvious it felt like a bad joke. When the movie actually slows down and takes some time for its characters, it’s greatly improved, but the comedic tone is just not good. It’s probably entertaining enough for a weekend stream anyway.

Cinderella is now streaming on Amazon Prime Video. The film has a run time of 1 hour 53 minutes and is rated PG for suggestive material and language.