Dual has two Karen Gillans for the price of one in this dark sci-fi satire.
by Jeremy Fogelman

In 2019 the movie The Art of Self-Defense was released by director/writer Riley Stearns, a super-dry, very particular sort of black comedy. It definitely worked for me, but I could easily tell that it was not the sort of thing everyone would like. In that movie, the characters have a very matter-of-fact way of talking, even about uncomfortable, awkward, or emotional moments -- even if they will show emotionality in other, more silent scenes. So I had certain expectations about this one.

Dual is the next film from Riley Stearns, who also writes and directs in his own quirky style. The movie takes place in the not so distant future where most things are the same, except for one particular little twist: cloning of people is entirely possible and actually quite common. We start the movie watching a man fight in a death match against himself, although we don’t know much else -- and soon things begin to make sense.

Karen Gillan stars as Sarah, a woman in a sort of decline -- she ignores calls from her mother (Maija Paunio) and feels distant from her boyfriend Peter (Beulah Koale). She’s basically drifting through life aimlessly, and it seems like there’s nothing much for her -- until she gets sick and is informed she has a fatal disease. The sort of vague, hyper-unique disease that means she’ll be perfectly fine for a few months and then suddenly die.

But this means Sarah is the perfect candidate for a replacement, a clone of her that can be used as a salve for her family and friends that would miss her. Of course, the new clone wouldn’t have her memories, which means that the Double would need to follow Sarah around and learn everything about her. So far so good (and odd), and Sarah introduces her double to her mother and boyfriend.

Unfortunately things don’t go so well in multiple ways, primarily that Sarah makes a miraculous recovery -- and the law says that only one copy of one person can exist, so in a year Sarah and her double must fight to the death. It’s a patently absurd premise, presenting a world where life is interchangeable, but it leads into the next phase of the movie -- training.


Sarah starts an entertaining training regime to survive with local dual trainer Trent (Aaron Paul), who definitely understands the assignment. Everything spirals in increasingly chaotic ways, until you begin to wonder if anyone will get out of it happy. The movie, like Stearns last movie, is very dark and has the same sort of offbeat, odd dialogue humor.

Just like The Art of Self-Defense, I found Dual to be engaging and funny, even if the underlying theme and message is a bit ridiculous and feels a bit thin from a satirical perspective. Karen Gillan completely manages the absurd dialogue and speaking style with ease, and does great work to show the differentiation between the two versions of Sarah.

I can’t say that this will work for everyone, even though I quite liked it -- I’d say that if you liked the director’s last movie, this one will also be up your alley. If you didn’t like it or aren’t into dark comedies, I don’t think this one will work -- but if you’re curious, I think it’s worth a shot to see whether or not you can appreciate this particular unusual film.

Dual has a run time of 1 hour 35 minutes and is rated R for violent content, some sexual content, language and graphic nudity.

Get tickets for Dual from Fandango! 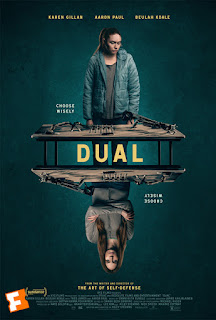