Chained for Life opens up with a quote from Pauline Kael that discusses how actors and actresses are more beautiful than ordinary people and how they have an advantage over everyone because everyone loves to look at beautiful people. This quote represents the film, directed by Aaron Schimberg, which offers a unique look at how actors and actresses with disabilities may be treated differently than others and what defines beauty. Chained for Life feels different than most movies that attempt to send a message like this. The film is about a German director (he may not be German and he may have been raised in a circus) who is shooting a horror film about a scientist who operates on disabled patients. One of the stars of the film is Mabel, who plays a young woman who is blind. She meets her co-star, the man she is supposed to be in love with in the film, Rosenthal, who is played by Adam Pearson. Pearson was born with neurofibromatosis, a condition that causes tumors to grow on his face. Mabel struggles with working with her co-star but opens up when Rosenthal asks her for acting lessons.

Their relationship builds on and off screen which features some charming moments amongst the two as well as some deep conversations. Rosenthal is very comfortable with himself, despite his condition, and considers himself shy even though he talks to everyone around him. Mabel is written as someone who worries about what other people say about her. Mabel is a beautiful actress and Pauline Kael would say that she landed her role because of her beauty. Rosenthal and Mabel are completely different characters and director Aaron Schimberg uses that to his advantage.

He is able to tell a story about how people with disabilities are treated while filming a movie or even out in public. The film the German director is shooting features other actors and actresses with disabilities and he makes them sleep in the hospital that they are filming the movie at while everyone else spends the night in a nice hotel. Schimberg uses subtle moments to capture how disabled people are treated poorly but making those moments feel heavy.

Towards the end of the film, it is hard to determine what is part of the movie being filmed or not. Many moments in Chained for Life has a scene starts off with intriguing dialogue that captures the viewers, but is quickly revealed to be a scene within their film. I found it frustrating at times because I found the scenes that were being filmed to be powerful, but it turned out to be part of a movie within a movie. This happens quite often at the end of the film with no transition into the crew getting together to set the scene.

One of my favorite aspects of the film is how often there are long conversations that are part of the horror movie that is being filmed as well as off-screen. There are a lot of conversations about beauty, dreams, and what people would do if they didn’t look like they did. Chained for Life had a lot to say about beauty and what defines it. Schimberg was able to convey his message well with a unique style of directing. Schimberg often utilizes long takes to allow for the actors and actresses to have deep meaningful conversations.

Chained for Life took a unique approach to tell its story. I loved Adam Schimberg’s directing as well as the message behind the film. I also would be interested in seeing the movie that was being filmed within Chained for Life. That seemed like a good movie too!

Chained for Life is released on DVD and Blu-ray by Kino Lorber on January 7, 2020. Click on the image below to order. 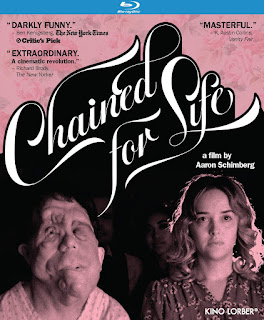