‘The Boys’ finishes its second season with some surprises and some of the same-old same-old.
by Jeremy Fogelman

The season finale of The Boys is called “What I Know”, which is of course, a pointless reference to the graphic novel titles as I’ve said ad infinitum by now. What will they do when they run out of titles that bear no real relevance to the episode at hand? I suppose they’ll have to come up with their own, which I think I would prefer.

The second season of The Boys was a bit all over the place, with some pretty decent social commentary and satire, along with some storylines that weren’t as interesting and some characters underwritten. Speaking of that part, as of the finale MM still never gets anything truly interesting to do or say -- real misstep on the show’s part. Now, the storyline in the graphic novel is quite problematic, offensive, and bizarre even for this show so I don’t think they should have simply used that. But giving MM essentially no memorable backstory isn’t a great tactic either.

Frenchie (or Serge as was said a few times) had just a little more, with the only really successful moments his up and down relationship with Kimiko, leading to a fairly nice ending with the two of them using sign language against Stormfront and going off dancing. Kimiko was always compelling, with Karen Fukuhara capable of really giving pretty crazy range without saying anything. If you’ve seen her on her YouTube channel or interviews, her actual personality is so different from Kimiko making it pretty stark and impressive.

I actually started the episode with a touch of apprehension and uncertainty, a good sign in general because I had no idea what was going to happen. Ultimately, the twists and turns and deaths felt a bit normal. Becca dies at the hands of Stormfront, who is killed by Ryan in a callback to “hating” someone in the same episode -- that’s not much of a callback, it was pretty easy to predict. 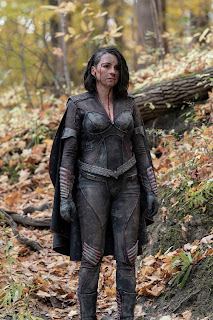 Aya Cash was obviously great the entire season, but I’ve been a “stan” of hers since You’re the Worst so nothing new from me there. The actual downfall though was so insanely fast, especially compared to the inconsistent pacing of the rest of the season, I’m not sure how well it worked. The finale was super fast paced, but sometimes the rest of the season suffered from not being paced that well.

I think I would’ve felt it worse if she managed to survive somehow into the next season the way they had set up the Nazi revelations -- and without her, the worst person is back to being Homelander, who did seem to be valuing Ryan over Stormfront throughout the episode, so the way it ended felt pretty reasonable. We’ve seen for a while that Homelander is obsessed with being loved and appreciated, so that was the only way for Maeve to get him to back off -- even if in his final speech we see the emptiness behind his eyes (Anthony Starr as always pulling off the sociopathic turn).

The entire Scientology storyline was, I suppose, merely a way to do two things: Reveal the new supe in disguise to us and return other things to the status quo. So A-Train’s back to the Seven because he happened to be listening in on Edgar and Alastair talking about him and Stormfront, which directly led to the Nazi leak and Stormfront getting beaten up by the lady supes in an explicitly called out reference to the “girls get it down” from earlier in the season. It would've been more satisfying to me if they had shown Stormfront with visible damage, otherwise I couldn’t tell if she was really getting hurt.

Now as for our new supe, Victoria Neuman (Claudia Doumit) who has been coded to seem like AOC or similar young progressive politicians, turning out to be a Vought plant the whole time? As Fry from Futurama said: "I’m shocked! Well, not that shocked." “Vic” Neuman was a character in the comics, a very stupid, clearly developmentally challenged man that becomes the vice president and is Vought’s puppet.

So when I realized that Victoria Neuman was a gender swapped person, I wondered why she was on the side against Vought. So it’s a good twist, because it makes sense, and actually uses the ignored storylines of the comics to help you figure it out if you read them. I appreciated that, and I feel that it’s a good setup for future seasons -- a smart puppet of Vought is more interesting than the GWB parody they had in the comics (which was really more the comics creators getting out their anger at GWB in the first place).

The final moments between Starlight and Hughie are fine enough, but their romance is a bit wonky too -- I didn’t mind it, but I never felt it was that interesting this season. And as for Billy, now that Becca is gone and Ryan is off under CIA protection, what’s his next move? Hard to say, but it seems like it must be something to do with Homelander and Ryan.

So overall, decent season, very watchable and with some real high points. A lot better than that Preacher adaptation, so as long as they can improve over time here, I think The Boys has a real shot at being lasting satire.

Email ThisBlogThis!Share to TwitterShare to FacebookShare to Pinterest
Tags: Amazon, Claudia Doumit, The Boys, The Boys S02E08, What I Know