Wine Country is a celebration of friendship

I just got done watching Parks and Recreation again and at this point I’ve given up counting how many times I have watched that show all the way through. One of my favorite characters was Leslie Knope played by Amy Poehler. Anything that Amy Poehler does I find to be funny. So naturally I was excited to see Wine Country since Amy Poehler directed the film and starred in it alongside her former SNL co-stars.

I like that this movie exists since the all the friends in the movie are friends in real life and this movie was inspired by Rachel Dratch’s 50th birthday, which was the reason all the friends got together here in the movie. Starring alongside Dratch is Amy Poehler, Maya Rudolph, Emily Spivey, Paula Pell, and Ana Gasteyer. These six comedic women are all SNL veterans and lifelong friends. By having Poehler work with her friends, it makes for a lot of the humor to feel natural. Not all of the humor in the film is funny, but when the jokes do land, they are hilarious.

The events of Wine Country tend to go off course throughout the film, which was hard for Poehler’s character to handle since she had printed out itineraries for everyone to follow on the trip. From the moment the trip started, everything was laid out for the group minute by minute, but there were many moments that tried to steer away from the group of friends and they weren’t that funny. Many of the friends go off and do their own thing such as Val (Pell) who hopes to hook up with a single woman and attends an art show to impress the woman, much younger than her, and ends up buying art instead. I preferred the scenes where the group was together, because those were the strongest moments in the film.

The constant spending time together and wine drinking led to the group opening up and expressing how they really feel about each other, which everyone saw coming. I totally expected this and was waiting for it, but the characters were never fleshed out which made me not care about that falling out. The film set these characters up nicely where they were all on the phone talking about how they were or weren’t excited for the trip and we get a little glimpse of their lives and how they have drifted off throughout the years. The characters didn’t get much growth in the film because they were often drunk or doing their own thing, which didn’t help those dramatic scenes.

Tina Fey and Jason Schwartzman also star in the film as the owner of the house and chauffeur, who apparently comes with the house and will do whatever the group wants him to do. I was expecting Tina Fey to be a little funnier in her role as widow who is very pessimistic. As Fey is giving the ladies the tour of the land, her strict rules try for humor, but it’s a bit dry.

It was nice to see all these friends together in one film, but it wasn’t as funny as I thought it would be since the ladies are SNL veterans. At times the film dragged and the side plots did help the group feel strong. As for Poehler’s first time directing, she had it easy since she was working with all her friends, but I certainly would like to see her direct another film soon. 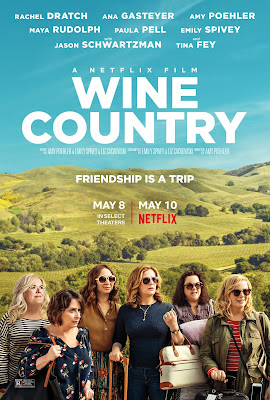