Imagine a movie where all the current young stars from The CW, Freeform, and other Netflix movies gathered in a place to play high school students getting ready for college. This is that movie. The Last Summer is essentially the Netflix version of American Pie. I don’t stay up to date with all of the current teen shows and movies. I have watched a few of them over the last few months, like The Perfect Date that came out last month, but I don’t watch Riverdale or Good Trouble, which stars actors and actresses from this movie. The Last Summer boasts a large cast of current young stars that People magazine may consider 'top actors and actresses to keep an eye on'. There isn’t one main storyline, instead The Last Summer consists of many different storylines of teenagers during their last summer before college trying to get a job, hook up, film a movie, and just enjoy themselves. The Netflix original film stars K.J Apa (Riverdale), Halston Sage (The Orville, Before I Fall), Jacob Latimore (Maze Runner), Maia Mitchell (The Fosters, Good Trouble) and Tyler Posey (Teen Wolf).

I felt as though The Last Summer was a watered-down version of America Pie. American Pie was raunchy and heartfelt at times, but The Last Summer tries too hard to be relatable and humorous, which came off as forced at times. With many different groups of people featured in a storyline in the film, it is hard to connect to one certain group of friends. My favorite part of the movie involved Halston Sage’s character, who recently broke up with her boyfriend of two years before they headed off to college. She attended a Chicago Cubs game with her friend and a foul ball knocked over her food on her dress and she was asked by the player who fielded the play out on a date. One reason I loved their storyline so much was the fact that it gave a look at Wrigley Field, where I have always wanted to go, but it also gave insight on a player’s life and how they are just like regular people. Tyler Posey plays the baseball player, Ricky Santos, and he connects immediately with Sage, and I enjoyed watching their relationship grow.

The Last Summer tried to balance too many genres at once. At times it wanted to be funny and raunchy, but right afterwards it tried to emotional and relatable. At times the humor worked and at times it was relatable, but they never meshed well together. I had a hard time judging what the movie was trying to aim at in the beginning since no group seemed to be the main part of the film and often they would introduce humor, which made me think it was a comedy, but then it tried to get deep and emotional, which made me believe it was a drama. In the end, I still didn’t know.

For a first-time introduction to many of these young stars, I thought the acting was decent. Most of these stars are older than high school students, but they were believable as teenagers with first world problems like seeing their ex-boyfriend with someone else and being upset when the end of the relationship was mutual and they came to an agreement that they could date other people. Truly heartbreaking!

I didn’t mind The Last Summer but I thought it tried too hard at times to be fun as well as relatable. This is like the Avengers of teen movies. All of the upcoming and rising stars are all together in one film, ready to assemble the perfect teen movie, but they ended up failing. 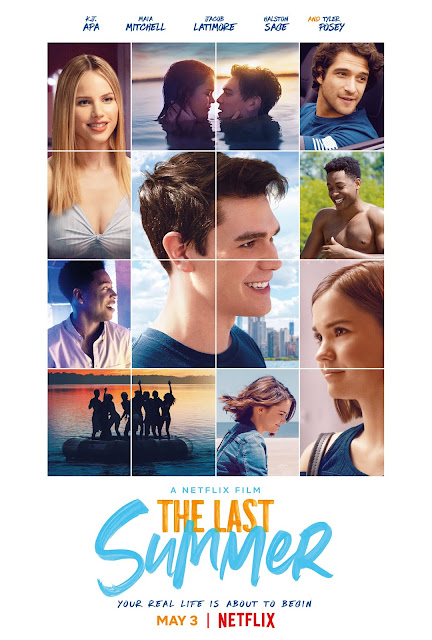 Read more of Justin's reviews at HOTCHKA.com
Posted by CRDBlog