When audiences don’t know what the play wants to be, does the play?

How exciting to see Susan Sarandon onstage! I have loved this great American actress all my adult life (I wasn’t allowed to see any of her movies as a kid, go figure). So when I read she was doing a play at the Pershing Square Signature Center I did the unthinkable: that thing I never do, ever. I paid full price for tickets. I wasn’t about to chance it with discounted tickets, this is Susan Sarandon, after all. So I came up out of the pocket, plunked down the cash and showed up on my assigned night to see the Academy Award recipient in a theatre so small that I would be able to hear the play without an assistive listening device, I would be able to actually see Ms. Sarandon in action. As it turned out, I needn’t have worried about any of that because I had forgotten the only seats available were in the first row. No worries about being hard of hearing, this night. I settled into my seat to enjoy a wonderful evening of theatre.

I wish I could say that what I got was a wonderful evening of theatre. But, as is my habit when I leave a play, I asked my actor husband what he thought of the show and he replied 'NOT until after you have written your review.' I respected that he didn’t want to color my findings. He knew that anything he said would affect what I wrote because he can read me like a book and this book was not satisfied with Happy Talk.

The New Group at the Pershing Square Signature Center is a great place to see new plays.They take the new play thing very seriously, though it is not their entire mission statement. They have done very good productions of some works that are tried and true; but the fact of the matter is that they specialize in new plays. I am losing faith in their ability to choose new plays because in the past I have gone with high hopes and been met with low standards. Happy Talk is no exception. Don’t get me wrong: Jesse Eisenberg’s play has some nice moments, most of them due to a knack with dialogue. The conversations between the characters can flow quite naturally, there were some laughs, there were some surprises. Not many. Indeed, near the end of the play I found myself thinking 'why am I taking this journey?' When you are sitting in a theatre you don’t want to remove yourself from the action to ask yourself why this story needed to be told, but that is precisely what happened to me, and it made me a little mad.

The title Happy Talk refers to a song from the musical South Pacific.  Mr. Eisenberg’s play was once titled Yea, Sister! which also refers to South Pacific. South Pacific is a big part of the play because this is the story of a New Jersey housewife who acts in plays at the Jewish Community Center and she is currently playing Bloody Mary in South Pacific. Get it? A middle aged Jewish lady in New Jersey is playing Bloody Mary. Ok. At her suburban home (a set gorgeously designed by Derek McLane, the kind of set you want to live on) she has an ailing husband and a dying mother, a Serbian in-home caregiver and an estranged daughter who won’t come visit or return phone calls. The ailing husband complains a lot but he seems to be not at all ailing, just kvetchy. The Serbian caregiver seems to be a nice person but seems to be a pretty bad caregiver. The Jewish housewife seems to be a needy, whiny, self-centered person who cannot bear to be left alone in a room. In conversation it comes out that the caregiver, Ljuba, is working her tripe out to bring her daughter to America and she cannot raise the money fast enough. The suggestion of a Green Card marriage comes up and her employer, Lorraine, offers to find her a suitable husband; and into the story comes Ronny, an effete Filipino-American who is playing Lieutenant Cable in the play. Ronny and Ljuba strike up a friendship so as to fool the Immigrations Office and Lorraine feels left out. From there begin the real shenanigans, as the health of both the mother and husband decline, as the estranged daughter pays an impromptu midnight visit, and Lorraine attempts to stay relevant in every storyline in her life.

Scott Elliott has directed some good productions. I’ve seen them. I’ve admired his work. I don’t know what happened here. The evening of theatre was rife with lack of follow-through and with situations that burst up out of nowhere, causing mushroom clouds of implausibilities. Why does the daughter show up out of nowhere in the middle of the night? Why does she hate her mother so much? Why does she crumble and become a weepy, whiny little girl when her father enters the room? Why does Bill, the father, spend three quarters of the play sitting in a chair, complaining, and then suddenly have a huge attack of something that leaves him incapacitated? To what end does Ljuba go from being a simpleton offering chips and salsa to the petulant daughter, to a person who slaps a stranger in the face over a verbal altercation? What is the reason Lorraine is so angry when Ljuba and Ronny become friends, when it was she who arranged their would be marriage?

All the answers occur in the last twelve minutes of the play, and, just as all of the other mushroom clouds in the story, it pops up suddenly and then dissipates. I will admit that when the big reveal happened I gasped, even stopped breathing, and it took awhile for the breath to come back. Mostly because it was the most interesting thing to happen during the entire one hour and forty five minute play (too long for a play at a theatre frequented by senior citizens, by the way). This climactic scene just dropped in our laps like a bag of wet cement and made me wonder where did this come from, why were there no real tells before this, what is the point of this story? If I’m being honest, I lay all of the blame for these questions at the feet of Mr. Eisenberg (a wonderful actor and, by all reports, playwright) and Mr. Elliott. I wish that Misters Eisenberg and Elliott had decided whether or not the play was a comedy or a psychological drama because they might have, better, guided their actors into a more cohesive piece of theatre. The actors, seemingly working on their own, are all doing fine work.

Marin Ireland is a lovely actor who, as Ljuba, seems a bit daft but very sincere (even if her accent work is not) and Nico Santos (of television’s Superstore) is very effective and charming as the hapless gay man playing hyper-macho Lieutenant Cable, but without any discernible singing talent. Daniel Oreskes does the best he can with the underwritten role of the husband, Bill, and Tedra Millan certainly brings angst (perhaps a bit over the top) necessary to communicate how much she resents, even hates, her mother. Susan Sarandon is, indeed, a great American actress. My favorite thing about watching her in the play is watching her listen. When other actors are speaking, she gives them everything. They have her full attention and she is never not present. It is a master class in acting. And her tender, quiet, wistful moment of talking to her not-at-all-present husband and singing 'Bali H’ai' was enough to make me shed a tear or two.

But she is wrong for this part.

The character of Lorraine is a New Jersey Jewish woman who is playing Bloody Mary in South Pacific, and they cast the WASPiest woman this side of Blythe Danner to play her.  The appalling situation of a Caucasian Jew playing Bloody Mary is designed comedy that could only be heightened with the likes of the late Anne Bancroft or Joan Rivers. I’m not sure who I would have hired, were I casting the role myself but Ms. Sarandon simply doesn’t have the over the top commitment to communicate the core essence of Lorraine to the audience, though she handles the pathos beautifully, as well as the rather scary final moments of the play. I never blame an actor for taking a part they have been offered. An actor with a job is a beautiful thing. But this time out, it was a miss, in spite of her obvious talent, gorgeous diction and perfect focus.

I hope the great star will be back on the New York stage soon because she is worth seeing live.

But Happy Talk is not.

Happy Talk runs about 1 Hour 45 Minutes with no intermission. The show runs through June 16, 2019. 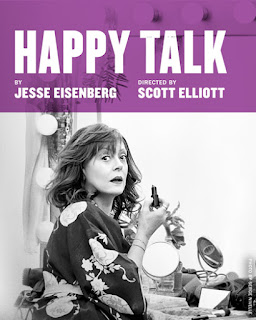