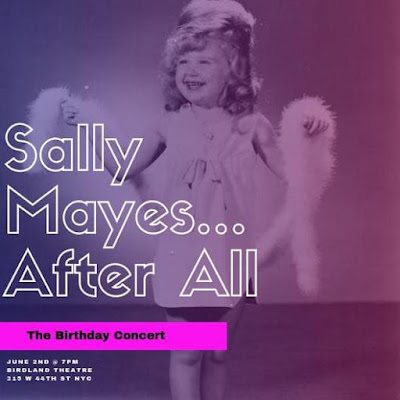 The great thing about staying in show business your whole life is that you get to know everybody, you get to work with everybody, your friends become your collaborators and your collaborators become your family. That’s what was on display recently at famed NYC nightclub Birdland when Tony Award-nominated actress Sally Mayes celebrated turning 60. A room full of family, friends, and fans convened to watch Miss Sally put on a show, inviting some of her greatest and most intimate of colleagues to share the stage with her, including her always present husband of 28 years (their anniversary was the day before) renowned bass player Bob Renino. Sitting in the audience one could spot luminaries of the New York entertainment community like Karen Akers and David Zippel, and it wasn’t a far stretch of the imagination to wonder whom from the house the birthday woman might call upon to lend a voice to the proceedings of the night, a concert titled After All.

'Motherf*ckers I’m Sixty!' was the cry of The Warrior after finishing her opening number, 'Danny’s All Star Joint', to thunderous applause. 'I’m always relaxed after I drop the F-Bomb, so now I can relax and have some fun,' explained the petite Texas chanteuse, looking svelte and sexy in her black sequin slacks and sparkly black sweater, looking every bit of 40. Dudes, if this is sixty, sign me up. Mayes is in magnificent shape vocally and physically -- 'I haven’t had a carb in three years' -- and the prowess that, in the 80s, labeled her one of the great jazz vocalists is not only still there, it has gotten better. With sassy confidence and complete ownership of the stage, her age and the glittering evening, she shared stories about her friends (the late Carol Hall whom, Mayes recounted, coined the saying 'she’s just a slut, bless her heart'), her career ('my husband got tired of me complaining about the treatment of Southern people in musicals and told me to write one of my own -- so I did!') and her family ('I never loved my mother more, even though she didn’t recognize me'). This was no mere cabaret act put together for people to hear a supreme artist execute their craft; this was a welcome window into the world of Sally Mayes, a chance to know her better than they had before, an opportunity to share herself, the most important thing of all.

Throughout the 75 minute intimate entertainment, Mayes bounced from her signature scat-singing infused jazz style to country western themed show music, from 70s pop with virtuoso arrangements to wailing Rock 'N' Roll. People only familiar with her performances in Broadway musicals or on her jazzy CDs were surely surprised to learn that her abilities include such wide-ranging genres of music. And for each style of music, Miss Mayes had a guest artist to help her along. Dueting on some Paul Simon with Jeff Harnar, her co-star in the cabaret Double Take, Mayes welcomed her first guest artist of the evening and together they charmed with their simultaneous scat-stylings before she invited a delightful Wendy Lane Bailey for some laughs with the comedic 'Round', penned by Amanda McBroom who sent a birthday message along with Ms. Bailey. The evening being a family oriented show with many of Mayes’ extended family in the audience, it was only right that the people on the stage be comprised of family as well, and not just husband Renino, because Mayes vacated the stage at this point to bring her brothers onstage - at least her artistic brothers, because the diva has been knowing and singing with Birdland host Jim Caruso and maestro Billy Stritch for almost as long as she has been singing. Together her fellow Texans and naturalized New Yorkers serenaded her with a mash-up of 'Come Rain or Come Shine' and 'You Are My Sunshine'. Caruso and Stritch have worked together many times, and it was like watching one of the great duos from the history of crooning, like Sinatra and Crosby doing 'Well Did You Evah', as Caruso belted and howled while Stritch purred and growled. The effect was mesmerizing, particularly if you took your eyes off the stage to look at Mayes, seated ringside, laughing and clapping along. Mayes traded places with Caruso to do a couple of duets with one-time singing partner Stritch (from the Montgomery Mayes and Stritch days back in the 80s), and while the quirky 'When I Take My Sugar To Tea' was fun to watch, the money was in 'A Song For You'. Now, this has been my favorite song since my youth, with my preferred versions being by Helen Reddy, Karen Carpenter and Diahann Carroll but after this performance by Sally Mayes all other recordings of the Leon Russell classic can gracefully step down, there’s a new favorite in town. It is rare and it is lucky to see a singer open up their heart for an audience to this extent. In this moment, we were all Sally Mayes’ family. 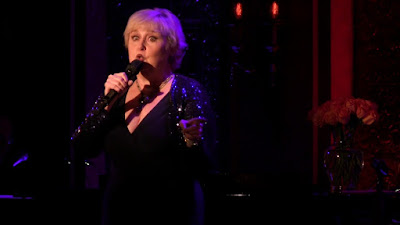 One of the highlights in Miss Mayes’ career was an off-Broadway musical called Pete N Kelly. Produced in 2001, the popular musical was revisited in a one-night concert version last year that went over so well that Mayes and co-star George Dvorsky are bringing it back to The Birdland Theatre for a sit-down run in November, and what a perfect time to celebrate that development by having the unbearably handsome leading man join her onstage for a little comedic singing in the form of a nightclub rendition of 'Battle Hymn of the Republic' that had the audience shrieking with laughter. In fact, much of the night was filled with laughter as Miss Sally brought forth her comedic chops; but there comes a point in every nightclub performance when things get really personal as the entertainer and the audience sit down for some very honest interfacing.

This was that moment.

Sally Mayes has written a musical. It is a Southern musical that will show the people of the South in an amiable and intelligent, in a loving and respectful, in an honest light. And though Contradiction of the Southern Soul is not an autobiographical story, as Mayes points out, it is informed by aspects of her life, which is how all great art is created. The show has had some positive feedback after being workshopped and is moving forward into the light, and it’s a good thing, too, because the two numbers Sally sang from the play are beautiful examples of what happens when poetry is put to music. There is a feel to Southern writing that is unique, that is unto itself, that is unlike anything else. Note the lilt and lyric in the works of Eudora Welty, Flannery O’Connor and my personal favorite, Truman Capote. Sally Mayes’ lyrics to the songs 'Whiskey Lullaby' and 'Like A Child' made me feel the way I feel when re-reading The Grass Harp. These aren’t songs she has written, they are intimate pages taken from her personal diary and set to music by Ethan Fein and Alex Rybeck, respectively. With Fein, Jessica Wright and Cooper Baldwin joining Renino to give Mayes a fully orchestrated band on these most personal numbers, an audience filled with southerners was given a mind-trip back home to see their Mamas and Daddys once more. It was incredibly moving, especially for this writer whose mother, likes Mayes’, suffers from dementia, an experience perfectly captured in 'Like a Child'. This was a perfect way to close the night.

Except you can’t end a nightclub act with heartfelt ballads! You have to go out with a bang! And what better way than to have multiple Tony Award recipient and raconteur Jason Robert Brown come out to share stories and songs before leaving the Birthday Woman to bring it home with that song that belongs, solely, to her. And while other women have sung the famed show tune, everyone with a grasp of musical theatre history knows that when Maltby and Shire sat down to write it, they wrote 'Miss Byrd' for Sally Mayes. And, yes, audience members throughout were mouthing the words and singing along as we got to see our dear old friend, Miss Byrd, one more time. It was a raucous way to end a perfect night at The Birdland Theatre and, like any entertainer worth their salt, Sally slipped quickly back onstage after her bows for one more taste of the talent that has made her a unique star on stages around this country. Singing the self-penned (with Tex Arnold) confection 'After All', Miss Sally Mayes waved a hearty and heartfelt goodnight to the ovating audience and, wiping a single tear from her left eye, stepped off the stage and went to get a glass of champagne and a slice of birthday cake.

Thank heaven she was born.

After All was a One-Night-Only event. To stay up to date on Sally Mayes’ performances follow her on Twitter @MayesSallymayes or check www.sallymayes.net.
Posted by CRDBlog