This season really has been one of the most entertaining to watch. They say that every year, but there was something special about the dancers this year, each and every one of them, and now that we are at the point where the big, tough, painful goodbyes hit, everybody just has to suck up and suffer. 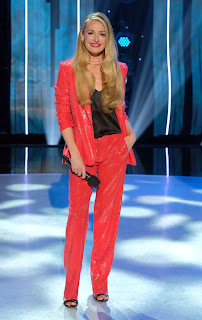 Fortunately Cat Deely is the best live show host in the business and she can turn even the saddest moment into a celebration. And, oh, so stylish is she! This night she looked every bit of the glamour queen in her red beaded Liza Minnelli suit (oh come on, you thought it, too), so much that every time the camera was on her, I sighed.

I also sighed over the opening number “Down” choreographed by Farside and Phoenix, but not in a good way. The dancing was nice but the lighting, the costumes, the hair, the makeup and the addition of all those all-stars made it impossible to tell which of the dancers were our competitors. It was like "Where’s Waldo" with a Twyla Tharp twist. While I can almost always find something positive to say, I was not loving this number.

But I WAS loving Al Blackstone and Koine Iwasaki helping Mariah and Bailey to advance in the competition with a bang-up Broadway routine to “Mambo Italiano”! Koine was so sweet, focusing on helping Bailey work on his acting, and honestly, her help must have been just what he needed because he was awesome in this number. But then, this entire competition he has been picking up styles he has never done before and dancing them as though he had been doing them all his life. Dominic said he believed it, Nigel said they were outstanding, Laurieann told Bailey to stay focused and Mary said he was the “Entertainer of the show” - and them’s big words, no mistake. Special shout out to Bailey’s Granny for being such a cool, supportive and fun lady, always looking after her personal favorite dancer.

Mariah had a solo to the song “Loved By You” and it’s pretty clear her technique is wonderful - it’s always been clear that she is simply wonderful. This performance made it clear that she needs a choreographer. Seriously, though, every dancer who gets on SYTYCD should have had the foresight to hire a choreographer to create routines for them. Winging it is never a good idea, and here, she was winging it.

Gino is up next, doing a hip hop routine by Luther Brown. And what do you need when a boy is dancing Luther Brown? You need Comfort Fedoke, yeah you do! OMG does everyone love Comfort as much as I do? Well then everyone must have loved this nasty, dirty, enjoyable, sexy number to “Get Up” - and as gorgeous and flawless as Comfort is, you just can’t get your eyes off of Gino, whose biggest supporter, his brother, was probably in tears the entire time. WHAT a masterpiece. Nigel said his strength and technique were impeccable, Mary said he came out fighting, Dominic told him he is a star and Laurieann said the elevation of hip hop freed him to get out of his head. Whatever anyone said, we all knew it was a spectacular performance.

Paired with all-star Lex Ishimoto, Madison landed a jazz routine by Mandy Moore to “Can’t Rely on You”, and it was really sharp and in sync, a pleasure to watch. You could just feel the judges getting ready to praise her, which they did, all except for Laurieann, who advised her to “let go a little more”, while Nigel said she has the best feet he’s seen this year AND that she let her emotions go. Mary liked the chemistry, and Dominic declared it to be her best performance since the beginning of the season. Her strongest supporter, Jarrod (duh!), was visibly moved and incredibly proud.

Ezra was up with a solo, again in a strangely fitting vest and trousers, but it didn’t matter because the performance to “Runaway Baby” was precise, hot, electric and a joy to watch, but joy seems to be what Ezra specializes in.

There was a lethal dose of ballroom hotness next when Pasha Kovalev arrived to choreograph all-star Kiki Nyemchek into a routine with Sophie to “Shape of You". Sophie’s dad is her big-time support system and he was welled up with pride after a whole new Sophie brought her A-game, causing Mary to say she was just like a professional ballroom dancer. Nigel said she relaxed into it, Laurieanne told her she had poise and timing texture, but Dominic said it best: “You’re blowing up right now.” Truthfully, up until this moment, I did not think Sophie would make the top four. This was a real turning point for her in my book.

Mariah, whose greatest support comes from her mom, landed a Misha Gabriel hip hop number with Fik-Shun to “We Gonna Win”. I love both of these dancers but I didn’t like this number. I felt it was incohesive and confusing, but I did appreciate Fik-shun taking charge of a prop/wardrobe malfunction. The judges ran the gamut, with Nigel saying he flat out did not feel it, Laurieann saying it was super, Dominic saying she is one of his favorite hip hop dancers and Mary giving out with a vague, “You will always bring in the magic.”

Bailey’s solo to “Writing’s on the Wall” did the same thing it always does - it proved that he is a born star, and that winning this competition or not will make no difference in his future. It’s written in stone. There is work that awaits him.

A contemporary piece by Robert Roldan is what awaited Ezra, paired up with Gabby Diaz to “Ne Me Quitte Pas”. The entire piece was simply magnificent, prompting the judges to heap praise on him. Mary: “This is your night.” Laurieann: “Something so very special about you.” Nigel: “You have freed yourself.” Dominic: “So absolutely inspiring.”

The All-stars finished for the night, the competitors were reunited with their partners as Sophie and Gino performed a Warren Carlyle Broadway piece to “Down With Love”. When Nigel said, “There is something about you two together,” he wasn’t wrong. This twosome is special. Mary said he reminded her of Gene Kelly and Laurieann said “Boom Jack Honey!” and we all know what that means.

Madison’s solo to “Lost” was typical Madison beauty, and since it was typical, it’s starting to look like she might be going home tonight. She is wonderful in every moment she dances, but predictable does not win.

Ray Leper was back to create a jazz routine for Mariah and Bailey that probably just put them in the top four. I’m not kidding. This number to “Need You Tonight” went beyond everyone else on the chemistry level, even Sophie and Gino, and they gots MAD chemistry. This is the number where these petite powerhouses showed everyone that great things come in small packages because this had ALL the damn things. And, honestly, if these two aren’t a couple, they need to be because it is clear he is into her, and he would treat her right. You can’t fake this sh*t. And all the damn judges agreed with me.

Dancing a solo to Shoshana Bean’s “Ain’t No Way” the wonderful Sophie proved once more that the dancers need to get choreographers to make up their solos for them.

Now, this is where we all found out who was going home. Madison and Ezra were given a Doriana Sanchez disco number to “You Make Me Feel”, and it was good - but it wasn’t great, and it was even remarked upon that Ezra held up his end of the deal when he held up Madison, but that his facial expressions showed that he was working. The judges didn’t criticize them, they praised them. They praised them in as few vague, benign words as possible. It was like when you know you’re dying because your doctor has stopped asking about your health and started asking about the weather. We all love Ezra and Madison, especially the judges, but when the judges are vague and polite with their critiques, you’re going home. And since it was stated at the top of the show that the judges knew the voting results and who was going home (something I don’t remember hearing very often in past seasons), even the contestants knew, if they were listening, who was staying and who was going.

Judges. Bad play. We just read you like a book. Not a best seller. Next time, play it a little closer to the vest so’s you can keep up the dramatic suspense. K?

If it weren’t clear before, Gino’s solo to “Missing You” made it clear: he’s staying. Rarely has there been a boy dancer of such flawless precision. Do it again, Gino, do it again.

Rounding out the evening were group numbers, girls vs boys. The girls got Ray Leper and Tina Turner’s recording of “I Can’t Stand the Rain” and even though Mary said they are all deserving (vague, but true) and Laurieann said “Pow Pow Pow!” (vague but true), the only thing this writer was thinking was “Madison needs to steal that hat” and “Meh”.

MEANWHILE. Talia Favia and “Amen (LCV Choir)" will be on the list of great SYTYCD performances. It was so good that I wanted to throw up. The praise from the judges was considerable and the men must have felt very proud of themselves, indeed, because it was, in a word, perfection.

And that’s it. Next up will be the finals, and the four moving into the finals, the judges made very clear, was based on votes, which is a nice way for the judges to get out of any responsibility when it comes to cutting any of these dancers who have insane abilities and legions of fans. In the end, though, whether it be based on votes or not, the two dancers sent home were Madison and Ezra. It was an impossible choice to make, and these two lovelies cried a little but they were most grateful, which they made clear. Cat kept it upbeat and loving as all said goodbye to the twosome, making way for The Final Four, who will compete next week: Bailey, Gino, Mariah and Sophie. All four are wonderful, all four are delightful, and it’s going to be hard to pick but I am going to go out on a limb and say what I said when the top ten were chosen: Gino is the best dancer, but Bailey has the benefit of being a brilliant dancer AND the most adorable human being on the face of the planet.

I’m calling it for Bailey.

What did you think of this episode? Give us your thoughts in the comments section below.
Posted by CRDBlog

Email ThisBlogThis!Share to TwitterShare to FacebookShare to Pinterest
Tags: So You Think You Can Dance, SYTYCD S16E13, Top 6 Perform