Recently I mentioned in a review that I’ve seen and reviewed a lot of movies by first time writers/directors, and that such things are a mixed bag -- more likely so when they also star in the movie. Thankfully this is a case of a movie of one and not the other, and also a case when one creative aspect elevates the other.

7500 comes from writer/director Patrick Vollrath in his feature film debut, and stars Joseph Gordon-Levitt as Tobias, a “young” co-pilot aboard a German airliner. The movie sets up a few little relationships here and there to start things off -- Tobias has a girlfriend Gökce (Aylin Tezel), also a flight attendant on the plane, and they also have a son together. There’s also the experienced regular pilot Michael (Carlo Kitzlinger), and he and Tobias have a decent, professional rapport quickly.

The world goes from normal to mad suddenly, when a bunch of hijackers attempt to take over the plan -- waiting for the moment when the cockpit door is temporarily unlocked. In the ensuing scuffle, both pilots are injured and only one hijacker makes it in, but is knocked unconscious. Thus begins an escalating set of circumstances, as an injured Tobias tries to make it to a nearby airport to land safely, while the hijackers try increasingly desperate methods to break in to the cockpit.

The specifics of the terrorists are not really important -- they are Muslim, and have a vague plan about mass damage, but it’s almost incidental. The story becomes the tale of Tobias, the only one who can fly things safely as he tries to de-escalate the situation. One of the interesting story threads is that Tobias tries to connect with the youngest, and less hardened of the hijackers (Omid Memar) which carries through the rest of the movie.

It’s interesting, because the story is essentially a very thin, typical sort of one, with stock characters and vague characterizations. A lot of our concern about JGL is the way he can sell the injury and circumstances, which he does very well. The terrorists are a bit one note, but the young hijacker is an interesting idea, and he does help you get a sort of empathy, if not entirely to the level I suspect the movie wants you to.

So one of the strengths is the direction here, because you get a great sense of that sort of confinement increasing the stress of the situation, yet it becomes almost serene when Tobias is all alone and you hear only the sounds of the engine. There’s something there I really liked, a different style on the “trapped in a room” sort of thriller because the cockpit isn’t really a panic room at all, it’s a place of power.

I think there’s something more to the movie that could’ve been done with a sharper script and more time on the characters, but for a first time effort, it’s a pretty solid little thriller. With people starving for content these days, I think this a pretty decent time to spend, not that violent, not that crazy, but tense enough to be interesting. 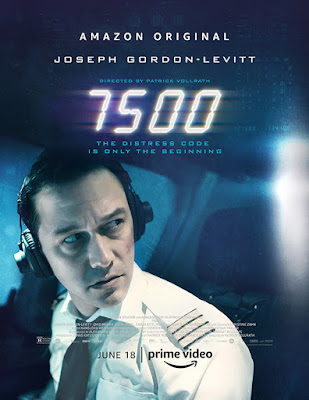