The CW Network will launch its seven-night 2022-23 primetime schedule in the Fall of 2022 with a strategic mix of new and returning original scripted series and alternative programming.

"As The CW looks towards the future, we are evolving and adapting to become more than just a network. We are a brand that drives our passionate and dedicated audiences to engage directly with our programming across all platforms, both linear and digital," said Mark Pedowitz, Chairman and Chief Executive Officer of The CW Network. "In the tradition of The CW's commitment to high-quality programming that features diverse and inclusive storytelling and characters, we are rolling out a fall lineup that features an exciting new crop of series including the prequel to one of our most successful franchises, THE WINCHESTERS, a wild-west origin story to another hit CW franchise, WALKER INDEPENDENCE, the action-packed original series PROFESSIONALS, the delightful legal drama FAMILY LAW and our latest magical alternative series MAGIC WITH THE STARS, as well as our expansion of The CW DC Universe GOTHAM KNIGHTS this midseason. We will also be saying goodbye to an iconic CW series that shaped and defined popular culture, RIVERDALE. All of these new series will also bolster The CW's growing digital footprint by adding to the growing library of content available to fans on our free, ad-supported CW App."

The CW is also joining forces with the United States Surgeon General on his effort to tackle the number one issue facing America's youth: mental health. Working closely with Vice Admiral Vivek H. Murthy, MD, MBA, the network will be launching a new initiative next season that will address this important issue by developing storylines across its programming, collaborating with advertisers and affiliates and using the network's expansive social media reach to engage directly with viewers.

Mondays feature the return of The CW's critically-acclaimed drama and most-streamed series ALL AMERICAN (8:00-9:00pm ET/PT), paired with the second season of the latest multi-platform hit ALL AMERICAN: HOMECOMING (9:00-10:00pm ET/PT).

Thursdays are bigger than the state of Texas with the return of WALKER (8:00-9:00pm ET/PT), followed by the premiere of the new Western drama WALKER INDEPENDENCE (9:00-10:00pm ET/PT).

The CW also has five original scripted series on deck for its 2023 midseason, including the new series GOTHAM KNIGHTS, as well as the returning hits THE FLASH (Season 9), NANCY DREW (Season 4) and SUPERMAN & LOIS (Season 3), plus the new alternative series RECIPE FOR DISASTER and returning series MASTERS OF ILLUSION (Season 9). The CW will also bid farewell to the cultural sensation RIVERDALE when it returns for its seventh and final season this midseason.

Additionally, every episode from the upcoming 2022-23 season of ALL AMERICAN: HOMECOMING, CORONER, DC'S STARGIRL, FAMILY LAW, GOTHAM KNIGHTS, KUNG FU, NANCY DREW, PROFESSIONALS, SUPERMAN & LOIS, WALKER, WALKER INDEPENDENCE and THE WINCHESTERS as well as MAGIC WITH THE STARS, MASTERS OF ILLUSION, PENN & TELLER: FOOL US, WHOSE LINE IS IT ANYWAY? and WORLD'S FUNNIEST ANIMALS will be available to stream on The CW's free ad-supported App following its broadcast on The CW Network.

Following is The CW's Fall Primetime Schedule for the 2022-2023 Season and accompanying details on each new series. 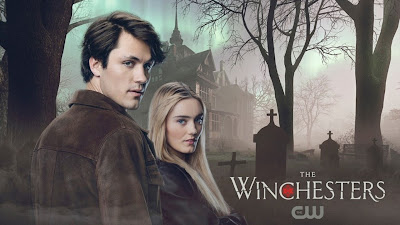 Before Sam and Dean, there were their parents, John and Mary. Told from the perspective of narrator Dean Winchester (Jensen Ackles, "Supernatural"), THE WINCHESTERS is the epic, untold love story of how John Winchester (Drake Rodger, "The In Between") met Mary Campbell (Meg Donnelly, "American Housewife") and put it all on the line to not only save their love, but the entire world. When John returns home from fighting in Vietnam, a mysterious encounter sparks a new mission to trace his father's past. In his journey, he crosses paths with 19-year-old demon hunter Mary, who is also searching for answers after the disappearance of her own father. Together, the two join forces with young hunter-in-training Latika (Nida Khurshid, "Station 19") and easygoing hunter Carlos (Jonathan "Jojo" Fleites) to uncover the hidden truths about both their families. Their investigation leads them to a rare book emporium, whose owner Ada (Demetria McKinney, "Tyler Perry's House of Payne") takes an interest to the occult and could provide the missing pieces to their puzzle. But secrets run deep for both the Winchesters and Campbells, and despite the best efforts of John's mother Millie (Bianca Kajlich, "Legacies") to protect her son from pursuing a dangerous life of demon hunting, John and Mary are both determined to work together to uphold their families' legacies while beginning to form a family of their own. 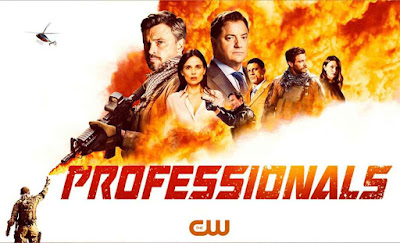 PROFESSIONALS follows Vincent Corbo (Tom Welling, "Smallville," "Parkland"), a top-tier security operative who is paid to protect the interests of rich and powerful clients by any means necessary - legal or not. After a next-gen medical-data satellite explodes on launch, Corbo is hired by the rocket's designer, billionaire futurist Peter Swann (Brendan Fraser, "Trust," "The Mummy"), who suspects sabotage. Complicating Corbo's new gig is his former paramour and now Swann's fiancée, medical visionary Dr. Grace Davila (Elena Anaya, "Wonder Woman," "The Skin I Live In"), who is racing to help stave off a global catastrophe. As Corbo and his team of veteran security professionals investigate the rocket disaster, they expose a lethal conspiracy of Swann's corporate rivals, corrupt government officials, and a shadowy crime syndicate - all working to destroy Swann and take control of his tech empire. Worse, Corbo must also contend with Swann's spoiled, troublemaking teen daughter (Jazzara Jaslyn, "Lioness") and a rogue Europol agent (Ken Duken, "Inglourious Basterds," "Counterpart") who is hellbent on busting him for past sins. 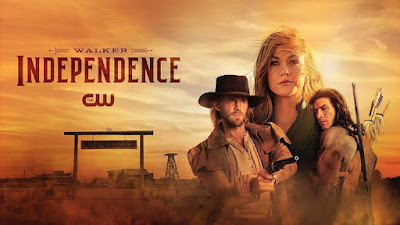 Set in the late 1800s, an origin story of The CW's current hit series "Walker," WALKER INDEPENDENCE follows Abby Walker (Katherine McNamara, "Arrow"), an affluent and tough-minded Bostonian whose husband is murdered before her eyes while on their journey out West. After crossing paths with Calian (Justin Johnson Cortez, "911: Lone Star"), a curious Apache tracker, Abby arrives in the town of Independence, Texas, where she encounters diverse and eclectic residents running from their pasts, chasing their dreams, and keeping their own secrets, including Kate Carver (Katie Findlay, "The Carrie Diaries"), an idiosyncratic burlesque dancer with perhaps too keen an interest in Abby's origins, and Kai (Lawrence Kao, "Wu Assassins"), a soulful Chinese immigrant who runs a local restaurant/laundry and offers Abby friendship without agenda. Abby also literally runs into Hoyt Rawlins (Matt Barr, "Walker"), a slippery rogue, thief, and con artist with a dented heart of gold who quickly eyes Abby as a mark, until she turns the tables on him. In seeking justice for her husband, Abby encounters Independence's noble deputy sheriff, Augustus (Philemon Chambers, "Single All the Way"), and his new boss, Sheriff Tom Davidson (Greg Hovanessian, "Another Life"), who she has reason to believe is a very bad man indeed. Abby and Hoyt soon find themselves precariously aligned, both seeking to uncover the truth about the identity of Abby's husband's killer, and vow to save Independence - a frontier boomtown where nothing is what it seems.

MAGIC WITH THE STARS

In each episode of MAGIC WITH THE STARS, two celebrities train with professional magicians and compete to create a show-stopping series of magic performances. The celebrity competitors are tasked with mastering three major categories of magic, which they perform in front of a team of judges led by magician Criss Angel. Only the highest-scoring celebrities will be invited back to the finale where they will compete for the golden wand. 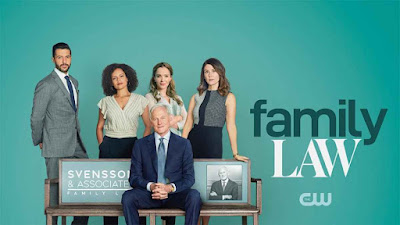 FAMILY LAW centers around Abigail Bianchi (Jewel Staite, "Firefly"), a high-paid personal-injury lawyer who's good at blaming others - particularly when it comes to her own problems. After Abby's husband kicks her out of the family home because of her drinking, she goes on a bender, shows up drunk in court and pukes on a client. The law society's punishment is swift. She's suspended, fined, and can only practice law again if she finds a senior lawyer who is willing to take her on and mentor her for a one year probationary period. Only one man is willing to take that risk: Harry Svensson (Victor Garber, "DC's Legends of Tomorrow"), who runs the top family law practice in the city. He also happens to be Abby's estranged father, who left Abby and her complicated mother for his secretary when Abby was seven. Now, not only does Abby have to work for her father, she also has to work with her half siblings: Daniel (Zach Smadu, "Cardinal"), from Harry's subsequent marriage and Lucy (Genelle Williams, "The Expanse"), from Harry's third marriage. Thus begins the odd dynamic at Abigail's new workplace. Abby has to try to put her shambles of a life back on track, all while dealing with family on three different levels: Other people's families in her cases, the family she was born into, and her family: her husband and two children, all of whom she desperately wants back. Abigail not only has to prove herself in a new realm of law; she also has to work with and build relationships with a family she barely knows. Most challenging of all, she must work under the thumb of the man she's spent a lifetime resenting. 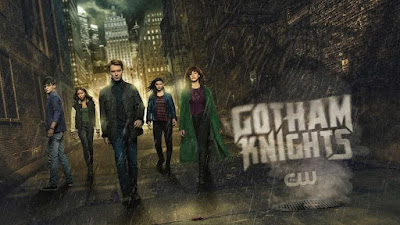 Batman is dead, and a powder keg has ignited Gotham City without the Dark Knight to protect it. In the wake of Bruce Wayne's murder, his adopted son Turner Hayes (Oscar Morgan, "De Son Vivant") is framed for killing the Caped Crusader, along with the children of some of Batman's enemies: Duela (Olivia Rose Keegan, "Days of Our Lives"), an unpredictable fighter and skilled thief who was born in Arkham Asylum and abandoned by her father, Harper Row (Fallon Smythe, "grown-ish"), a streetwise and acerbic engineer who can fix anything, and her brother Cullen Row (Tyler DiChiara, "The Virgin of Highland Park"), a clever transgender teen who is tired of being polite and agreeable. With the charismatic and hard-charging District Attorney Harvey Dent (Misha Collins, "Supernatural") and the GCPD hot on their trail, Turner will rely on allies including his best friend and formidable coder Stephanie Brown (Anna Lore, "All American"), and unlikely Batman sidekick Carrie Kelley (Navia Robinson, "Raven's Home"). But our Knights will soon learn there is a larger, more nefarious force at work within Gotham City. This team of mismatched fugitives must band together to become its next generation of saviors known as the GOTHAM KNIGHTS.

In each episode of RECIPE FOR DISASTER, three professional chefs and their cooking partners compete to prepare spectacular dishes under absurdly adverse conditions. Our studio transforms into a bizarre new world each week, replete with themed disasters that challenge our chefs in ways they never imagined. They will attempt the perfect sear while stranded on an in-studio "desert island" during monsoon season, prep ramen while pulling off an art heist, or create a show-stopping soufflé while dodging aliens on Mars. To make matters worse, their cooking partners are people from their lives who are total kitchen novices. Who will impress the judges, and whose dishes will succumb to the ridiculous disasters du jour? Ultimately, only one team will be crowned Masters of Disaster!