Blu-ray review: Blinded By the Light

Blinded by the Light was released in theaters over the summer and was met with positive reviews. I missed the movie then, but thanks to Warner Bros., the Blu-ray copy they sent me to review will allow me to finally see what people were so excited about over the summer. Blinded by the Light was directed by Gurinder Chadha, who directed the 2000 sports film Bend it Like Beckham. This is inspired by the life of journalist Sarfraz Manzoor and his love for Bruce Springsteen. The film stars Viveik Kalra as Javed, a British-Pakistani Muslim teenager whose life is changed after he discovers the music of The Boss. The movie also stars Haley Atwell as a creative writing teacher, who pushes Javed to continue writing. Javed feels out of place at his new school. He struggles in his writing class and is rejected from the school’s writing paper. He feels that he is going nowhere with his writing, but once he discovers Springsteen, everything changes. Blinded by the Light takes a deep look at the power of music. When someone discovers an artist, they start to relate to them and it's all they think about. Viveik Kalra gives a fantastic performance as someone who struggles with the fact that they may not be the best writer they can be. The beginning of the film offers a realistic look at that struggle, but the film picks up and becomes jubilant once he discovers Springsteen. He starts to feel better about life, asks a girl out, starts writing more and everything just seems to fall in place for him. Music has that power on one’s life and Blinded by the Light and Kalra capture that well.

One of the things I found most impressive about Blinded by the Light and its presentation was the use of shadows. When Javed first listens to the Boss and runs outside, the use of shadows behind him provide excellent detail and offer a nice bonus to the movie. Chadha also utilizes lyrics on the screen, which has become popular lately, but they were done in an effective way that captured the lyrics that resonated with Javed.

This is a movie where the audio needs to shine. If the audio wasn’t at least decent, we wouldn’t be able to feel Springsteen’s lyrics the same way that Javed felt about them. Luckily, Warner Bros. put a lot of effort into this release. The moments with Springsteen’s music feel grand and the pop music soundtrack sounds so clear

Blinded by the Light was a very surprising film. I enjoyed how heartfelt it was. Springsteen’s music was powerful within the movie and the use of the lyrics on the screen were able to capture how Javed felt. At its core, it is a film about how an artist can change someone’s life and if anyone listens to music, they can relate to this movie. I also fell in love with Bruce Springsteen a little more with this movie!

Blinded by the Light is available on Blu-ray/DVD from Target.com and the WBShop.com and on Digital from FandangoNow. Make any purchase through the links and help support Hotchka! 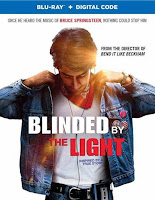 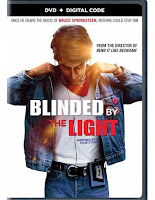 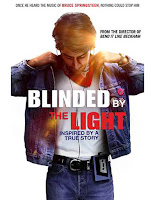 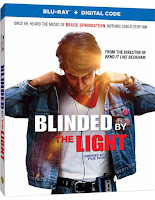 Blinded By the Light soundtrack available from Target.com. 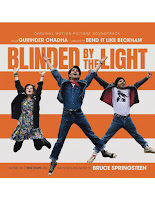 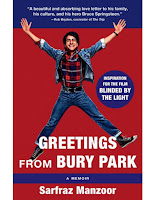