Movie review: A Beautiful Day in the Neighborhood

A Beautiful Day in the Neighborhood proves the necessity of Mr. Rogers even now
by Jeremy Fogelman

Of course I need to start with a confession: I never liked watching Mr. Roger’s Neighborhood as a kid. Perhaps I was already too old by the time I was even watching TV at six years old, but I do remember Sesame Street and Reading Rainbow being my jam back then. Mr. Roger’s was pleasant but often too slow and I didn’t really appreciate the show. It’s easier to appreciate what he was in retrospect, especially after last year’s emotional documentary. But did we need a Mr. Rogers biopic? Not really, and thankfully that’s not what we got.

A Beautiful Day in the Neighborhood comes from director Marielle Heller, written by Micah Fitzerman-Blue and Noah Harpster, inspired by the real life article written by Esquire writer Tom Junod in 1998 called "Can You Say ... Hero?" I recommend the article as an interesting bit of context for the movie, although I wouldn’t read it until you’ve seen the movie. Some elements are explicitly connected to the film, others are invented wholecloth.

The movie is framed as though it’s an episode of the television show, with Mr. Rogers (Tom Hanks at his most sincere yet) introducing us to the story of his friend Lloyd Vogel (Matthew Rhys), the Esquire writer loosely based on Tom Junod. As we cut between scenes in different cities, the movie cleverly shows us various cityscapes in model form like the credits of the show, lending a feeling of unreality to Lloyd’s journey.

Lloyd is a new father, raising his son Gavin with his wife Andrea (Susan Kelechi Watson), and a writer for Esquire magazine. His typical articles are take-downs of public figures and celebrities, but that leaves him unpopular with potential interviewees. He also has a fraught relationship (or lack thereof) with his father Jerry (Chris Cooper), who abandoned Lloyd and his mother. Jerry shows up at Lloyd’s sister’s wedding, and it doesn’t go well. Lloyd is completely uninterested in Jerry’s requests for forgiveness or insistence that he’s changed after a long term relationship.

Then Lloyd gets a writing assignment to interview Fred Rogers, and there is a concern that the grim, cynical writer will “ruin people’s childhoods”, including his wife’s. Over the course of the movie, Lloyd’s continued interview and conversations with Mr. Rogers digs deeper and deeper into the lessons that are difficult to hear. Lloyd has difficulty believing that anyone can be so nice, but the movie reveals that it is and isn’t that simple.

The lesson here is that Mr. Rogers wasn’t a saint, but someone that worked to push back on his negative emotions and temper, and tried to spread good lessons to people, mainly children. Eventually in a scene of real emotional depth that is a truly wonderful moment of acting and directing, things begin to sink in.

The movie is unafraid to get weird, delving into hallucinatory images as Lloyd’s mind tries to get a hold of itself. Here Matthew Rhys, late of The Americans, shows off his perfect hangdog emotional complication, the self-proclaimed broken man that has an arc of healing. Chris Cooper is great like he always is in these problematic older man roles, while Susan Kelechi Watson gives depth to the “supportive partner” character type. And of course, Tom Hanks is wonderful, the driver of the movie but not the star, embodying Mr. Rogers in style and feeling without aping or impersonating him.

Ultimately this is a movie uninterested in hagiography of person but romanticism of personality. The lessons of Mr. Rogers sound so treacly and childish when you’re not in the right space to hear it, but he was always so connected to empathy and effortlessly communicative. It shows a way for anyone to get better, if they try, and that’s radical enough to praise in the slew of feel bad movies we’re getting these days.

Pre-order A Beautiful Day in the Neighborhood today from FandangoNow! 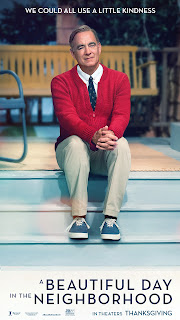