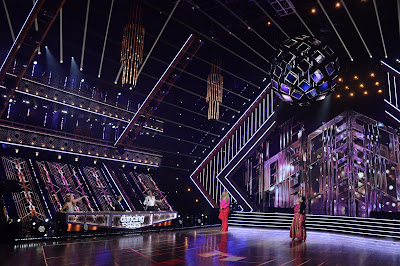 I wasn't sure what to expect when it was announced Dancing with the Stars was returning for its 29th season amid the coronavirus pandemic. Would the dancers be forced to compete wearing masks like some sort of grotesque sequined masqueraders? Would it change things dramatically without having a live audience to root them on in the ballroom? Would there still be group-choreographed dances to open the show? Would there be a subdued feeling due to current world events? Would all three judges be able to return? How could the show possibly go on with new host Tyra Banks after the producers unceremoniously dumped Tom Bergeron and Erin Andrews?

The show began with the pros dancing one at a time to a stripped-down rendition of Whitney Houston's "I Wanna Dance with Somebody." It was very subdued and unlike any of the other season premieres I've witnessed over the years. And I didn't really like it if I'm being honest. It just didn't feel right. The judges were almost comically social distanced so their arms can't touch when they're gesturing. The ballroom felt more than a little sad without an audience or Tom. Tyra Banks quickly grated on my nerves with the only thing possibly bigger than her ego being the red dress she wore when she first entered the ballroom. How many times are we going to have to witness her changing hideous outfits during a single show? Poor Bruno must not have had access to hair dye during the quarantine, although he managed to work it with his new silver fox look. It was great to see my favorite dance pro Derek Hough back as a guest judge in Len Goodman's absence due to the international travel restrictions. Much as I predicted, he was the nicest judge by far, often giving the contestants a higher score paddle than his fellow judges. The dancers aren't wearing masks, but the show is taking great measures to keep them safe and socially distanced, including forced quarantines and several temperature checks throughout the week. But like all of DWTS' new changes or not, the show must go on. Let's take a look at how your favorites did on this first week of competition:

I was in high school when The Backstreet Boys were at their peak in the late '90s, and I'm sorry, but they were old-looking even way back when (I always thought N*SYNC were cuter dancers with catchier music even though I was more of a grunge rocker). AJ was a good choice to open the show, as he was light on his feet. Derek enjoyed his confidence, while Bruno called it a powerful debut from a bona fide performer although he told him he needs to work on his kicks and flips. Carrie Ann said it started the show with a bang, but he needs to be larger than life with his dancing if he's going to stick around in this competition.

Chrishell Stause of Selling Sunset fame? I've never heard of her or her program, and she failed to impress me during her Tango set to P!nk's "Raise Your Glass." Bruno said she managed to get the Tango in escrow, but they're a long way from selling it due to her many missteps. Carrie Ann admired her potential, while Derek told her to work on her pigeon toes.

As an NFL player and Superbowl Champion, Vernon knows what it takes to go all the way in this competition. He came out in command with an ethereal Foxtrot set to John Legend's "All of Me." Carrie Ann admired his stage presence but docked him points for a lift. Derek called it smooth but cautioned him about his arm extensions. Bruno thought their chemistry was sizzling, saying he can't wait for a Rumba from these two.

As one of the handful of familiar faces to me this season, I was looking forward to seeing Anne's fancy footwork. The spacey backdrop was a nice nod to her colorful claims of being an extraterrestrial goddess in her autobiography. I loved their shiny, almost hypnotic costumes. Derek commended them for being clean and for making him smile. Bruno called her a sparkling cracker, but told her it needed a little more hip action. Carrie Ann admired her precision and tension with her partner, saying she is a star of the ballroom. It was certainly an out-of-this-world experience.

Although I do love most of ABC's game show reboots, I must confess I do not enjoy Holey Moley, which Jeannie co-hosts. However, her Salsa with newcomer Brandon was as fun as their lime-green costumes and song choice of Taylor Dayne's "Tell It to My Heart." Bruno called her a little ray of sunshine but cautioned her about keeping her balance. Carrie Ann said it was amazing to see her energy light up the room and can't wait to see what she has in store. Derek cautioned her about her turns but said it was well done for her first dance out of the gate.

I remember when Jesse starred on the supernatural soap Passions (one of the rare exceptions to my 'I don't watch soaps' rule because I was in high school and it had a Dark Shadows vibe to it). It was also awesome to see Sharna return to the program after what felt like a lengthy hiatus. I think they're the couple I'm rooting for this season. This "Part-Time Lover" captured my full-time interest on the dance floor, even if his Quickstep seemed a little lacking in energy. Carrie Ann called it a passionate Quickstep, but said he needs to tame his intensity with better posture. Derek praised him for being a leading man on the dance floor, while Bruno echoed this, saying it was fantastic.

Not being an avid Disney Channel watcher, I had no idea who Skai was before this competition. However, like the other exuberant Disney competitors before her, she quickly won me over with her spirit. Derek complimented her on her posture but noted he would have liked to see her travel more distance on the dance floor. Bruno called it a mature performance from such a young lady. Carrie Ann admired the way they dealt with the height difference, saying it was an exciting performance. I hope this young competitor sticks around for a while.

Yawn, another Bachelorette star. ABC needs to stop relying on their interchangeable bank of reality stars. Her Cha-Cha wasn't terrible, but I will never vote for her because I just don't care enough. Bruno told Artem it was nice to see him back and doing a wonderful job with Kaitlyn. Carrie Ann called it a great first dance but told her to watch her footwork. Derek thought she has potential, but her arms were misplaced and the dancing felt a little too safe.

Catfish is a show I've heard of but never watched, although Nev made me an instant fan of his quirky personality with his magical Foxtrot to "The Way You Look Tonight." Carrie Ann found it uplifting and refined. Derek warned him about making sure his butt stays tucked into his frame, while Bruno admired their debonair style.

I predict good things for Johnny, if his first dance is any indication. Figure skaters tend to do well in this competition because they're so naturally fluid. The Pussycat Dolls' "Loosen Up My Buttons" seemed like the perfect song to introduce his sassy enthusiasm and flair to the world. Derek cautioned Johnny about staying confident and out of his head because he could tell when he felt lost in the dance. Bruno commended his lyrical qualities but said his hips need more precision. Carrie Ann wondered why he hasn't been on this show before because he seems like a natural fit ... my thoughts exactly!

I didn't recognize Justina from One Day at a Time. She seems to be a fun match for Sasha. She looked uber confident in her Cha-Cha set to Aretha Franklin's "R-E-S-P-E-C-T." Bruno complimented her in Spanish, which I assumed was a good thing. Carrie Ann said she was on fire, while Derek told her she oozed charisma. Tyra said she had the ballroom and America hyped. I guess Tyra was bound to be right about something.

NBA player Charles Oakley oozed style even if his Salsa moves were a little stiff. As one of the older contestants this season, he has room for improvement. I'm confident Emma will inspire him. Carrie Ann told him to work on his timing and filling the space. Derek said he felt joy from the performance but urged him to work on the finesse. Bruno liked that he got in the laid-back spirit of things, but told him if he gets the timing right, he'll be a bigger contender.

As the head coach of Cheer, Monica is in tune with her competitive spirit. Derek called her a breath of fresh air, although he said her turns felt a little congested. Bruno thought it was elegant but warned her not to break her wrists when extending her lines. Carrie Ann was impressed with her confidence, although she could tell she wasn't always in sync with Val. I was mostly surprised the show's producers didn't pair Val with Carole Baskin this season.

Nelly's Salsa with newcomer Daniella was money. I found it entertaining - he's surprisingly flexible. I hope he goes far in this competition. Bruno called it a wonderful ride, telling Nelly he has nicely rhythmical hips. Carrie Ann did not see the backflip coming (nor did America), telling him his groove is right but he needs to show more of his heart and who he is beyond his persona. Derek cautioned him about wearing dancer's shoes in future routines instead of tennis shoes, although he felt they were totally appropriate for this particular performance.

Am I the only person in America who didn't binge-watch Tiger King during quarantine? It's still on my to-do list and may be a little higher in priority now that I've witnessed the spectacle that is Carole Baskin for myself. What else would Carole Baskin dance to other than Survivor's "Eye of the Tiger"? It was a black-lit train wreck I couldn't take my eyes off from start to finish. Carrie Ann said her ultimate summer dreams just came true. Derek commended her for coming out with the tiger theme, although it needed more attack. Bruno thought she was going to dislocate her shoulders (as did most of America I'm sure). Has anybody received anything lower than a 3 in this competition? Ouch.

How did your favorites fare this week? What do you think about the new host, fill-in judge, ballroom look, and safety precautions? Will you be tuning in this season to see who takes home the coveted mirrorball trophy or is it a pass?

Dancing With the Stars airs Mondays at 8:00 PM on ABC. The next episode will air on a special night, Tuesday, September 22 at 8:00 PM, due to Monday Night Football.