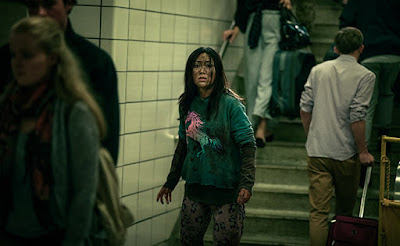 ‘The Boys’ drops three episodes for a third season of bloody explosions and attempts at subversive commentary.
by Jeremy Fogelman

The first season of The Boys was decent enough, as I reviewed at the time, spiraling off significantly from the comics storyline enough that I was completely unsure of where it was going. The second season so far continues that trend, killing off characters like Raynor (Jennifer Esposito), who certainly lasted far longer in the original comics. In fairness, she was a pointless character in the adaptation, so the impact of her death doesn’t feel particularly significant.

All of the original ensemble has returned, continuing the story with varying degrees of success. Hughie continues to suffer PTSD from his misadventures, and it’s only been touched on a little since then. Frenchie and Mother’s Milk still have almost nothing to do, but they at least give Karen Fukuhara more to do with the now named “Kimiko” (she also was finally utilized well in the She-Ra Netflix animated show).

Kimiko’s arc with her brother (played by Abraham Lim) was pretty good in these first three episodes, setting up a mystery about who this mysterious new “super terrorist” was, getting Butcher almost killing him, Kimiko reconnecting, and them fighting over his terrorist ways (that he justifies by American imperialism and wanton destruction and murder in his home village). It all connects with the final moments of not-so-secret white supremacist Stormfront (Aya Cash, always welcome -- she was great in You’re the Worst) murdering her brother and tossing off some racism casually.

Of course, Stormfront in the comics was a literal Hitler Youth superpowered child extracted from Germany who grew up to be a monstrous “Thor” styled rip off because Garth Ennis thought it would be clever to combine Norse mythology with racism, like the Nazis did (both the original and modern day Nazis co-opted Nordic imagery). Here Stormfront is American, from Portland, and female, allowing a bit more rug pulling later on.

Now, when I read the comics in the first place, I recognized that the name Stormfront was itself a reference to the white supremacist website, even though that too is an appropriation. So I was not exactly surprised when the character turned out to be racist. Here she’s shown softer at first, quirky and rude, making fun quasi-feminist jabs against Vought and systemic patriarchy, but she’s only (hardly a coincidence) really interacting with the white superheroes of the Seven -- Homeland and Starlight.

I was wondering when the other shoe would drop, and it does in the third, brutal episode where Stormfront, on the tail of Kimiko’s brother, casually kills many black civilians for no reason except her hatred and racism. Her savvy nature presents an interesting new sort of antagonist, both against the already monstrous Homelander (who simply thinks all humanity to be worthless compared to him, but he’s not racist about it -- small help) and the Boys.

The final shot of episode three, the Boys surrounding Kimiko as she stares hatefully at Stormfront’s press conference, that’s a good setup and really getting us finally invested in her story -- we want to see her take revenge on the racist monster that killed so many people. That storyline works so far. 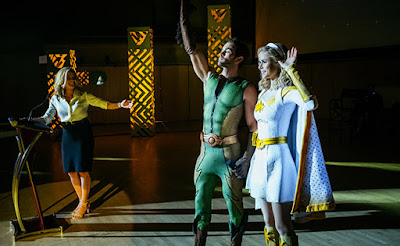 Less successful is the Starlight business in general -- her theoretical spywork feels a bit scattershot, with only a few interesting moments, and the romance angle doesn’t feel that interesting yet. A-Train has little to do yet, other than moments of dizziness, and Maeve just has a little backstory with her secret girlfriend to explain why it must be a secret.

Homelander continues to be a fascinating sociopath of a character, trying to push his son with Billy Butcher’s wife to display superpowers, and although eventually the kid does display some, it feels like Homelander still won. Antony Starr is still really great in the role of this odd, terrible person, who suffers and causes suffering in turn.

Least successful of all is everything with the Deep’s attempts at recovery, which parody Scientology pointlessly and have an extended hallucination montage where Patton Oswalt plays the Deep’s gills (he’s funny but...) and ultimately tries to push the idea that the Deep’s issues comes from self-hatred. Sure, I can buy that, but he’s still someone that sexually assaulted and killed people. He hasn’t done nearly enough to be forgiven, and I was glad to see that Starlight immediately rejected the attempt.

But the show continues to be gory and profane, and Giancarlo Esposito gets another role where he exudes confident sociopathy so that’s fun. I feel like there’s some good setup here for the rest of the season, which will be released weekly going forward, and I’ll continue to be amused at how they use titles from the graphic novels completely differently for the episode titles.

New episodes of The Boys stream weekly on Amazon Prime.