The Boys S02E04: Nothing Like It in the World 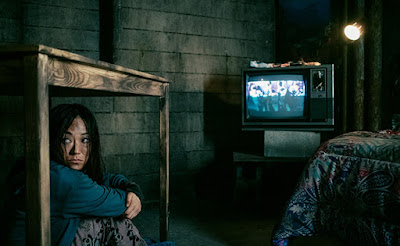 The Boys takes it slower as things get worse for everyone.
by Jeremy Fogelman

The latest episode of The Boys is called ‘Nothing Like It in the World’, which is yet another direct title reference to an issue of the comics, albeit without any connection whatsoever. As somewhat close as the show stayed similar to the comics, it’s completely different now -- honestly I can’t even imagine the same ending, at least not in the same way. I suppose I appreciate that freedom, although I hope the showrunners actually do have a plan about it.

There is a bit of a continuation of Kimiko’s grief, anger, and desire for revenge, but the Frenchie kissing her was so absurdly out of character it made me realize that Frenchie has no characterization at all in the show. He is legitimately the least interesting character in the show, and I don’t know if that’s going to improve -- it didn’t this episode, nor did his tryst with his “therapist” raise anything interesting.

Mother’s Milk takes Hughie and Starlight on a classic road trip to track down a mysterious old supe from back in the day, nearly fifty years ago. This leads to some decent moments of relationship drama and interactions, and there’s even a little backstory finally on MM -- he’s been incredibly underutilized until now. It was a bit long in the tooth as a subplot this episode, even if the final moments are useful backstory (although it was pretty clear to those who knew the original material).

The revelation, that Liberty was simply Stormfront before she changed her name, isn’t much of one unless it leads to more darkness in the past with that supe -- thus why she changed her name. Stormfront essentially says the same thing when confronted by Homelander, that she had to change with the times. Her creepy attention is likely sincere -- obviously a superhuman blonde, blue-eyed, white guy is the pinnacle of her ideals. I’m just glad that Aya Cash gets an interesting character to sink her teeth into after years of being ignored for excellent work on You’re the Worst, even if often it feels very unsettling to watch her in action. 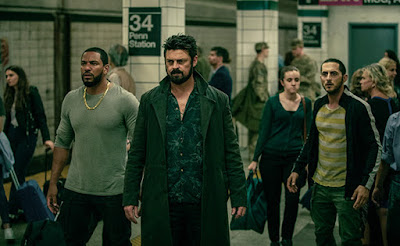 Butcher’s storyline, of tracking down his wife Becca, is fine enough, although the final moments are a bit... strained in the believability department. Butcher calls Becca’s son a freak, and doesn’t want to bother to take him along -- honestly, it’s a bit ridiculous that he wouldn’t try. Becca seems to be the one thing that’s different for him among the rest of the world.

In last place of interest is the Deep’s storyline of interviewing potential wife candidates from his thinly veiled Scientology parody. It’s hard to care about it, and it’s not really funny -- but at least the other two storylines are interesting still. Black Noir’s creepy search for Butcher was interesting, if unsettling, in the “this will hopefully pay off soon” way.

Homelander’s further descent into increasingly monstrous behavior continues, including threatening Starlight and having Doppelganger pretend to be the woman he killed. The final moments, of killing “himself” by rejecting caring about what other people think of him, as the music twangs discordantly, should certainly raise alarm bells.

His change of heart with Maeve is a step back in a way from the pit, but he takes the wrong lessons from racist monster Stormfront. As usual, it’s acted exceptionally, even if it feels paced a bit oddly -- slower than normal. Overall, it’s interesting to watch an episode of the show when not binging it -- it feels quite a bit different than normal. Still an entertaining watch, but it does feel a bit like one of the “place setting” transitionary episodes than something self-contained.

Email ThisBlogThis!Share to TwitterShare to FacebookShare to Pinterest
Tags: Amazon Prime Video, Nothing Like It in the World, The Boys S02E04