The Boys S03E07: Here Comes a Candle to Light You to Bed


The Boys delivers an epic twist that sets up a legendary season finale.
by Jeremy Fogelman

The latest episode of The Boys is called “Here Comes a Candle to Light You to Bed” after a nursery rhyme that ends like this:

Here comes a candle to light you to bed,
And here comes a chopper to chop off your head!
Chip chop chip chop the last man is dead.

So... you get it. The episode starts with Vought in full spin mode with their media calling things “A Nation Betrayed” and people referring to Hollywood Pedo Ring (which is not really an exaggeration of how people talk in a certain conspiracy circle). There’s a little jokey old school video with Soldier Boy singing the 1963 song “Never Make A Pretty Woman Your Wife”, just another moment of showing how out of the modern world he really is.

Hughie and Butcher interrogate the Legend to get more info about Soldier Boy, who is hiding out there and hooking up with the Legend’s older housekeepers. The running joke about the Legend nodding in “pretty cool, huh?” ways to Hughie every time he boasts about a celebrity sexual conquest continues to be hilarious, especially Hughie’s confusion and discomfort about it.

Their next target is the mindreading “Mindstorm”, a renamed version of “Mind-Droid” from the comics, who is an obvious parody of Vision from the Avengers. I’m not sure why they changed the name here, as the character in the comics only pretends to be an android, so maybe they thought that would be too “hat on hat”?

But the real trick is to avoid getting mind-blasted by the guy, who perhaps could even affect Soldier Boy with his little tricks. That storyline ends up quite powerfully in quite a few ways, but some of the other storylines are even more so. We discover that Maeve is still alive, and Homelander says menacingly it’s only so we can harvest her eggs in the future to make super-babies -- truly one of his more awful moments, which is a difficult list to top.

Kimiko decides that she wants the real compound V, and her written letter to Frenchie and Annie that this time it’s her choice is the convincing factor. So Annie sneaks into the Vought tower to find the compound stuff, but while there she discovers that temporary V will basically kill someone after taking it too many times. And then Homelander confronts her, but Annie was smart enough to start streaming on her Instagram Live feed to incriminate Homelander for real -- at least so you’d think. It’s enough to get her away.

It’s an emotional if sad moment when Kimiko heals again, wanting to be able to use her powers for good. In the exact opposite vibe, MM ends up knocking out stepdad Todd and terrifying his daughter after the dude keeps taking Janine to Homelander rallys (obviously analogues for Trump style ones).

As for our other supe folks, A-Train has been given the murdered Blue Hawk’s heart and can run again, but his brother Lamar doesn’t want to have anything do with him and his actions -- another family tragic moment in an episode about them. The Deep mentions that he’s actually going on Hannity -- so no satire, just a direct reference to the real world Fox News idealogue. He also convinces his girlfriend to branch out in their sex life by including an octopus, which is truly the silliest thing in this episode.

In one of the more traumatic moments though (which is saying something), we see Black Noir surrounded by figments of his imagination, cute cartoon animals that are there to support him -- and see a sort of flashback about Soldier Boy beating the hell out of him. This twist, that Soldier Boy was actually the one who permanently injured Noir -- well now, that’s quite a well set up one, and a fascinating one, because the episode also makes it a point to show how Soldier Boy also suffers from serious PTSD and is traumatized himself.

But we don’t know how badly things will go with the final twist of the episode. We see an extended, harrowing series of flashbacks of Butcher first protecting his brother from his father and then failing to do so, continuing with the episode’s themes of family trauma. It’s easy to see then, when the episode makes it clear, that Butcher sees Hughie as the younger brother he might still be able to save.

That final twist is a pretty good one though, and one that makes perfect sense -- it turns out that Homelander is actually the biological son of Soldier Boy, so of course they’d be the most powerful supes around. And apparently Homelander was born in 1981 meaning he’s supposed to be about 40 or so -- I can buy it. But we have to assume that Homelander didn’t know yet, so now that’s finding out his true backstory? It means that the season finale next week really could be anyone’s guess. 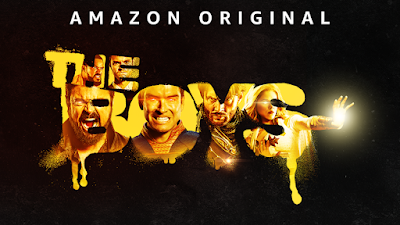 Email ThisBlogThis!Share to TwitterShare to FacebookShare to Pinterest
Tags: Here Comes a Candle to Light You to Bed, Prime Video, The Boys, The Boys S03E07