The Boys ends a complicated season with a blowout and a lot of trouble to come.
by Jeremy Fogelman

The third season finale of The Boys is called “The Instant White-Hot Wild” which is a reference to a wholly unrelated issue of the comics, but who really cares about that? After all, isn’t everyone here to see who wins in the big Homelander versus Soldier Boy fight? Of course, the show is clever enough to subvert such expectations, but getting there is half the fun.

Things get set up further as Homelander retrieves Ryan and worryingly seems to reasonably connect with him -- telling him it’s not his fault he killed his mother, because people with their power sometimes have lethal accidents. This is also contrasted with Soldier Boy revealing his own traumatic backstory with his abusive father, a rich dude who never loved or respected his son -- yet all his “real man” talk sunk so far into Soldier Boy he never escaped it.

We also see a glimpse of the Homelander versus Starlight protests, and it’s pretty clear what real life situation this is meant to be mirroring. The final heist/battle is well set up, with everyone getting something to do one way or another, even if they aren’t all on the same page. Frenchie will be creating the neurotoxin to take down Soldier Boy, while Kimiko will keep him safe -- Maeve is able to escape using trickery and badassery, but she only wants Homelander to die at any cost.

Billy hides the truth of the Temp V stuff from Hughie and knocks him out to keep him safe, who finally realizes his own trauma when Annie tells him the truth -- that Billy saved him, just like his own father (who Hughie always looked down on as weak) was always there taking care of his son. “I didn’t know what strength was,” he says, and this is certainly made true later when Hughie doesn’t take the Temp V and instead powers up his girlfriend with a clever move.

We see The Deep killing the VP pick at Homelander’s command, which is clearly the quid pro quo he had with Victoria, who gets to become the next VP candidate and likely the first supe in office. Noir is sadly killed, just after getting a bit of characterization last episode, by Homelander who feels betrayed -- almost understandably.

But the most horrifying part of the episode is the tension when Homelander introduces Ryan to Soldier Boy -- if they team up, it’s clearly a bad situation. But Soldier Boy passes down his own abuse and calls Homelander a disappointment, then attacks Ryan when the kid lasers him in retaliation. Suddenly Butcher is conflicted, as he wants to protect Ryan, while Maeve intercepts Homelander and actually gets his nose bloody (although she loses an eye).

The well structured fight ends with Maeve sacrificing herself (it seems at first) to protect the hundreds of innocent people in the building by pulling Soldier Boy out of the building when he tries to use his detonation power. So that just means we need know how everything goes for the gang.

Maeve becomes a normal human and goes into hiding with her girlfriend, and is called a martyr by the news. Butcher has only 12 to 18 months left to live, but he doesn’t tell the gang this, only that he’s gung ho to take out Victoria as the new VP candidate. Starlight can now fly, just as in the comics, and seems to be in a healthy relationship with Hughie. The Deep’s ex Cassandra puts out a memoir hilariously called “In 2 Deep: My Journey 2 Freedom” which is great. MM (who has been the most underserved this season and by the show in general) gets to hear his daughter call him her hero.

But in the great, fascinatingly creepy ending, Homelander greets his fan and introduces his son to applause. Then Ryan gets hit by something from a random pro-Starlight protester calling Homelander a “fascist” (hmm) and Homelander snaps, lasering the protester. But instead of turning on him, Homelander’s fans (perhaps started by stepdad Todd) begin to cheer, their own dark impulses made manifest.


And we end the season with Homelander pleased that people (if awful people) love him and Ryan smiles too. So... that means two potential Homelander types to worry about in the future, while Soldier Boy is still alive and put back on ice this time by Mallory. At least Homelander isn’t deciding to rule by fear, right?

Ultimately this was a great way to end this season, which sometimes suffered from satirical confusion and underserved some of its huge cast of characters but stayed strong with the horrifying Homelander and Soldier Boy arc. Perhaps that makes it the best season so far, and a great way to look forward to the next season whenever that comes out. 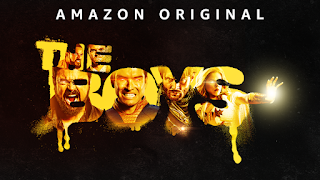